A new proposal from the team’s Chairman on the possible planning application. 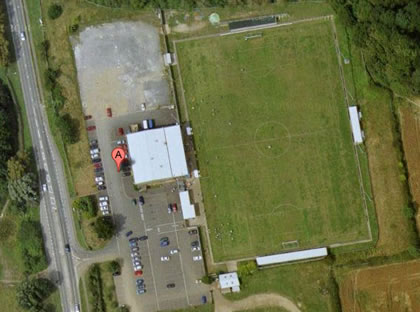 As an update to the previous story about developing the site, this has just been released. In the words of Paul Phelps, Chairman, Newport (IW) Football Club – Ed.

There has been further movement on the ASDA / change of club venue “activity” that all of you connected with the club should know.

The pitch and stands will remain exactly in the same current facing and direction.

All of the plans are being displayed for anyone, and especially yourselves, by South Coast Leisure this coming Saturday 26th January 2013 at St Thomas Church, St Thomas Sq, Newport, between 10am and 4pm. A visit could be squeezed in before the game against Brighouse Town later on the same day.

For Newport (IW) Football Club this is the simplest and most economical move and I ask you to give it your positive consideration.

Maybe Asda could look at a town centre site or three instead of this out of town location?

It might help support more local businesses instead of just giving the football club some money and then pulling more money away from our ailing high streets and failing towns?

Its not the football club who are going to make money it’s the property developer landlords !

Vote Up00Vote Down
Gaz
Seriously, Am I the only one who thinks we really don’t need this Asda. Have you been in the Southampton store? It sells absolutely everything. This will be the death of Newport town centre which we can all see is struggling enough. I give Newport 2 – 3 years after the completion of Asda – then say goodbye to BHS, WH Smith, Waterstone and many more. I… Read more »
Vote Up00Vote Down
wight portal
It’s not only Newport’s High Street that will suffer, but every Island town. When this was first kicking off and George Brown was crowing over how good it’ll be for the Island to have Asda, I asked him what he thought the benefits were to such a idiotic scheme. He replied saying that, apparently the majority of the Island’s workforce are looking for part time employment and… Read more »
Vote Up00Vote Down
Colin
Deja Vu. I can remember similar arguements put forward by “local” shops when the those chainstores and others appeared on the island. Asda is coming, like it or not, but doesn’t appear to be interested in the football club owners proposals. Back then, Newport played in what is now Morrisons car park. The club made a small fortune at the time selling the land and relocating to… Read more »
Vote Up00Vote Down
greenfiremouse
@ Gaz: I totally agree with you. We already have more than enough supermarkets; I was also against the Sainsbury’s extension which totally destroyed that part of Newport. Local shops contribute an awful more to Island life than Asda, Tesco and the like, and they will struggle against their short term competition. In the end, we are all poorer for it, because it’s the local shops that… Read more »
Vote Up00Vote Down
peaceful_life

This is the last thing the island needs, moreover….it should be looking to localise it’s own food, and securing jobs along with it.

These things are behemoth vacums on any local community and their economies.

There ARE other ways.

Vote Up00Vote Down
Colin
Another plus for the supermarkets of course is the free parking provided. The council is far too keen on fleecing motorists at every opportunity and contributes to driving customers(no pun intended) to those with the large free car parks often out of town centres. If the ridiculous parking charges were scrapped, more money would be spent in the High Streets. The shops already pay high business rates… Read more »
Vote Up00Vote Down