NHS campaigners spread the message during the week of 70th birthday

Members of the IOW Save Our NHS Group travelled across the Isle of Wight this week, collecting signatures for a giant birthday card that has now been presented to St Mary’s hospital, and spreading the word of the upcoming public consultation. 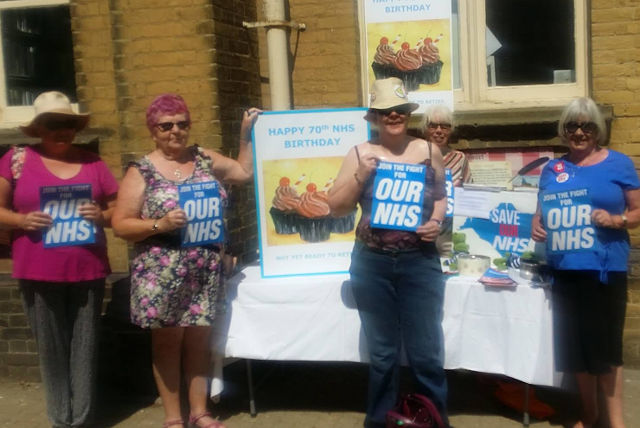 Christine shares this latest report from the IOW Save Our NHS Group. Ed

This week, members of the campaign group IOW Save Our NHS visited towns across the Island gathering signatures on their giant hand-made birthday card to celebrate the 70th birthday of our precious free at the point of delivery, NHS.

People flocked to the stall in Ryde, East Cowes, Newport, Sandown, Shanklin and Ventnor to sign the card and engage in conversation with us.

Equally, it was evident there is widespread concern and dismay about the current plans for our NHS and what this may mean to us on the Island as Government plans to privatise it and strip it of its assets continues unchecked. Take part in public consultation
The group encouraged people to look out for the Public Consultation on the Acute Services Redesign which is due to take place in the Spring 2019, at which time they will be able to have some say on the final proposals.

This will involve the CCG putting forward several final options for the delivery of Acute services on the Island/mainland with their own recommendation on which option to choose.

Giant birthday card
The giant birthday card was jam packed with signatures by the end of the tour and it was presented to the NHS Trust’s Communications and Entertainment manager on behalf of all NHS workers on Wednesday evening at the Past. Present, Future NHS event at the Riverside Centre, Newport.

It will now hold pride of place in St Mary’s Hospital where staff and members of the public will be able to read all the comments made by Islanders.

Work continues
In the meantime the work of IOW Save Our NHS continues, as we try to uncover plans for primary care and care in the community, some of which appear to be coming into effect under the radar, without warning and without general public scrutiny.

newest oldest most voted
Alternative Perspective
profoundlife in many ways you are quite correct. There are 135 acute non-specialist trusts in the UK, each with a leader earning the same as the Prime Minister, and in some cases considerably more. It’s a complete absurdity. As substantially more funding for the NHS has been announced, the entrepreneurial vultures are circling ready to snatch and divert public money into the coffers of the Private Sector.… Read more »
Vote Up14-2Vote Down
eastcowes
One of the major problems is that that model. And part of that is because of the semi-privatisation efforts that have been made over the last 20 years. Giving GPs control over their budgets did very little but raise their malpractice insurance and create additional admin overheads. More ‘local control’ in Trust has actually limited the NHS’s largest power to save money through bulk purchasing, enabling pharma… Read more »
Vote Up130Vote Down
greenhey
What we get from the NHS is value- considering what we pay into it. We pay in a lot less than in most Western European countries. If you want the opposite example it’s the US where roughly double the share of GDP to ours goes into a system which delivers poor outcomes and still leaves millions not covered. It worries me very much that one outcome of… Read more »
Vote Up12-1Vote Down
profoundlife
Watch me get shot down, but I don’t get the love for the NHS. I don’t get why we’re celebrating 70 years – did we celebrate any other anniversary? Maybe it’s because a lifespan was traditionally three score years and ten. I really am tied to free public healthcare. Like almost every developed country has. But running it through the NHS just doesn’t work as well as… Read more »
Vote Up4-35Vote Down
eastcowes
I am sorry that you have had relatives died in the system, as you say. But as someone who has lived in many countries who has also had family and friend die in their ‘systems’ – for which they paid exorbitant amounts of money or couldn’t even afford the preventative or curative healthcare (and I too struggled badly in two of those countries) – I can’t say… Read more »
Vote Up32-1Vote Down
peterj
Perhaps you know you will be ‘shot down’ because deep down you know you are talking utter nonsense? The 50th anniversary was equally celebrated 20 years ago – they even minted a special 50p coin. What exactly is wrong with taking pride with a health system unique in the world? Yes of course it has flaws but the vast majority of it’s problems is the massive underfunding… Read more »
Vote Up31-7Vote Down
profoundlife
It is not nonsense that my son died who was savable. Not nonsense that when my uncle’s operation was botched, the NHS closed ranks and did everything possible to stop anyone saying there were problems and leaving themselves open. Not nonsense that when I saw my father die of cancer, I couldn’t help but notice we have some of the worst outcomes in Europe for the dreaded… Read more »
Vote Up11-27Vote Down
eastcowes
…and I have lived around Europe and elsewhere and seen horrific outcomes. When things go bad, a LOT of people in alll systems do bad things like close ranks. You view that as an NHS problem. Really sadly (and I mean that), you have had your unfair share of bad experiences. All that we are trying to reassure you is that it is not ‘the NHS’. I’ve… Read more »
Vote Up20-7Vote Down
profoundlife

What I’m saying is that it’s beyond personal data, painful though that is. Look at the data – the NHS is expensive to run and has worse health outcomes than comparable countries in Europe. The alternative to that isn’t privatisation, so it’s a straw man to suggest it is. Plus we have a culture that hides the Staffords and Gosports. There is a better way.

Vote Up5-17Vote Down
tr2015
The real problem we have is that the NHS has become a sacred cow. You can’t suggest any measure of reform without being shouted down. Today, it is too big to manage, no-one is in charge, no-one is accountable. layers and layers of so called management that are nothing of the sort, wasteful spending, I could go on. I am amazed at the dedication of staff who… Read more »
Vote Up5-14Vote Down