If you’re in Portsmouth check out this exhibition

We’re big fans of Island based artist Nick Martin, so rather excited to see that he has another exhibition coming up. 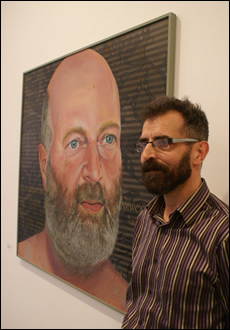 If you weren’t lucky enough to see his Blue Eyed Boys exhibition at Quay Arts last year, you’ve got a chance to catch his latest work over in Portsmouth from Monday 15th November.

As well as many of the monumental portraits depicting an alternative beauty of blue-eyed bearded men from the ‘bear’ world shown on the Island, Nick’s latest exhibition also includes other work inspired by Etruscan and Renaissance art.

Nick says of it, “This is a playful tribute to my family life and the things that are important to me and to them. It is a distilled moment in time saying ‘Here we all are!'”

Where and when
The exhibition takes place at the University of Portsmouth between 15th November and 31 December 2010.

Full details about the exhibition and talks, can be found on the Space Website.

To hear more from Nick about his work, listen to our 2009podcast
[audio:http://otw-audio.s3.amazonaws.com/nick-martin-blue-eyeyd-boys.mp3]

Image: © Used with the kind permission of Nick Martin

Filed under: Isle of Wight Art, Overseas, What's On