Nick Percy gets Silver in the Common Wealth Games for his record breaking discus throw.

Congratulations to Nick Percy from Bonchurch, who has beaten the under-17s Scottish record twice, as well as setting a new under-17s British record at the Commonwealth Youth Games on the Isle of Man. 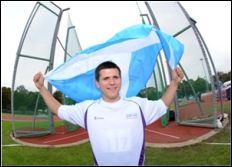 VB readers will remember that Nick picked up Gold at The UK School Games the previous weekend.

He was representing Scotland in the Commonwealth Youth Games and will arrive home with a silver medal in the final of the men’s Discus.

He told the Commonwealth Games Federation, “I am so happy with my result, having thrown almost a three metre personal best. The competition was really tight, with people delivering some huge throws, particularly the world leader for the year.

“I’ve thrown a few over 60m before but I hadn’t hit one in competition until today. To save it to the last throw was fantastic, but I feel upset for the guy I pushed into third. We’re all great friends in the throws and we’ve been cheering each other on and congratulating one another on our performances.”

Well done Nick, you’ve made many people very proud of you.