Well done to Bonchurch lad Nick Percy who has excelled again in the Junior Discus!

Congratulations to Isle of Wight athlete Nick Percy who last week achieved yet another record in the Junior Discus. 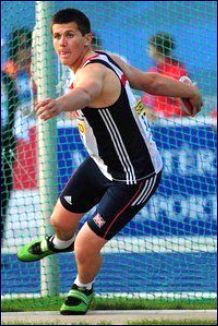 This makes Nick just 1.38m off the World record and the World Juniors in Barcelona next month might be just the place to attempt it.

He told Scottish Athletics, “I have been throwing well and beating the Scottish junior record for 1.75kg was my target this weekend. It is a new PB by a couple of metres so I am really pleased with that.”

Not far off qualifying
He went on to say, “I still think there is an even bigger one to come from me and hopefully that’s soon as I am not far short now of the World Junior qualifying distance – just 1.38m short in fact.

“I don’t see my coach every day as I am on the Isle of Wight and John Hillier is in London but things have been coming together well this season.

“I wanted that record so it is good to get my name to the top of the list there. And hopefully I can be in Barcelona for Team GB as well.”

Congratulation Nick, you are a great role model for young people on the Island. Best of luck next month in Barcelona.