The Isle of Wight Motorcycle Club held the ninth round of the 2019 Winter Series Trials Championship on Sunday 6th October at Bembridge Down. 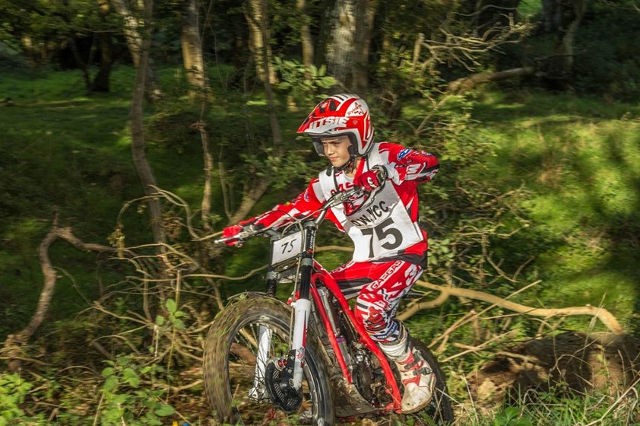 The Isle of Wight Motorcycle Club held the ninth round of the 2019 Winter Series Trials Championship on Sunday 6th October at Bembridge Down.

The Club would like to thank Rob and John Taylor for the kind use of this excellent venue. Very many thanks also to Alan Gosden (Course Setter) Viki Taylor (Club Photographer) Peter Rank (Guest Photographer) and to all eight Observers – great team effort.

New member
The Club would like to extend a very warm welcome to new member; Tristan Osborne. We hope he enjoyed the trial and we look forward to seeing him again soon.

Not the easiest of trials for a debut, the exposed tree roots were very greasy after some heavy rain overnight, resulting in some high totals for most riders.

Scott Trial for IW riders
It was great to see Elite rider; Josh Stephens in action, negotiating the Expert route for a loss of sixteen – no doubt getting in some important bike time before he travels up to Richmond, North Yorkshire for the gruelling Scott Trial.

Josh will make the journey with British Expert Champion; Chris Stay together with James Stay and Mark Coombes – we wish the four of them all the very best as they take on one of the most testing events in the trials calendar.

Scout Gregory and Sonny Gaskin were tied on seventy-nine – Scout was awarded the third place notching up four cleans to Sonny’s three.

Mature riders
There were four Over Fifty riders (everyone’s getting older!) and it was Rory Stephens who took another very convincing win with a fine total of only nineteen.

Simon Watmough did enough to claim the second spot from Andy Scott-Jackson in third.

Clubman class
Colin Brodie and Phil Chase were involved in another tie break in the Clubman class.

Both riders scored sixty-six a piece. Colin took the win by the narrowest of margins, managing ten cleans to Phil’s nine – good effort by both these friendly rivals.

Sportsman riders
The pick of the Sportsman riders, once again, was Geoff Taylor, with a competitive total of fifty-six. Tristan Osborne, in his first trial for many years managed a good total of forty-eight, sensibly riding mainly ‘D’ route sections.

Youth classes
Five Youth riders taking on the tricky Bembridge sections, headed up by Dan Locke and Josh Morris in the Youth Experts.

Dan managed to seal the win twenty-one marks clear of Josh – sections four and six proving to be the deciders. Alfie Haydon put in his usual confident performance to take the points in the Youth Intermediate class.

It was really good to see Alfie Gaskin back on his bike so soon after his recent arm injury whilst on holiday – it was thought he would be forced off the bike for much longer than this. He finished the trial to take the points in the Youth Novice class. Bertie Grieve continues to gain in confidence in the Youth Beginners bagging himself another ten Championship points.

Next meet
The Club next meet on Sunday 20th October for the Ted Phillips Cup. Your Course Setters for this trial will be Andy Scott-Jackson and Stuart Gummer. The usual start time of 12 noon with signing on open from 11am.

Please keep an eye on the Club Website where details of the venue will be published nearer the time.

Finally on behalf of the whole Club – I would like to wish Jos Wright all the very best following a horrific car accident on Saturday evening. Our thoughts are with Jos and his family at this difficult time.

Report shared by Wayne on behalf of the Isle of Wight Motorcycle Club. Ed