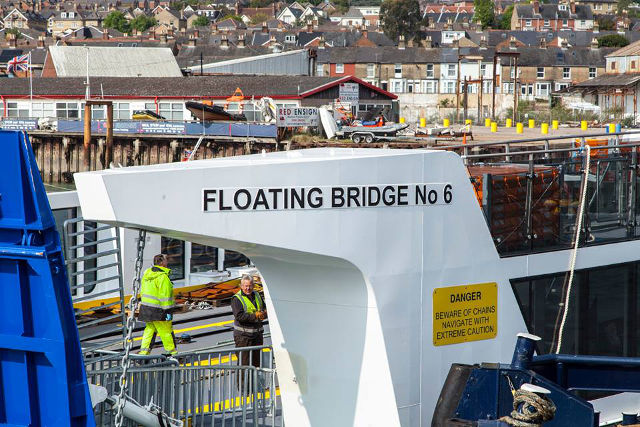 “There will be no new Floating Bridge.”

The leader of the Isle of Wight Council, Dave Stewart, has shut down ideas the authority will buy a new vessel to replace the beleaguered Floating Bridge 6.

Throughout the numerous problems, one solution raised by campaigners was to replace the boat.

The vessel was taken out of action in July this year for routine maintenance but a problem with the hydraulics was found and the boat still remains out of action, almost nine weeks later.

At a meeting of the Isle of Wight cabinet on Thursday night, Cllr Stewart was asked when the council would order a new one now that he has said the vessel is not fit for purpose.

Stewart: A perfect storm of destruction
In response, Cllr Stewart said the current administration inherited the managerial responsibility of the chain ferry and all the challenges and issues that have come with it from the previous Independent administration.

“When it arrived on the Island, everyone expected it to work correctly and provide a good service for the community for years to come.

“What we did not expect was the catalogue of problems we have since experienced over the subsequent years.

“Added challenges recently has been the need to remove it from service during the main parts of the St Mary’s Roundabout roadworks from August to September, creating a perfect storm of destruction when we least needed it.”

Roadworks at the new junction had been causing traffic jams and hold-ups over busy periods in August as the new Forest Road exit was introduced.

Stewart: No plans to order a new floating bridge
Cllr Stewart said the primary focus now is to maintain the service as the council starts the talks to secure ‘appropriate remedy for the damages that the local council has suffered.’

“I have been drawn to question whether the vessel was truly fit for purpose when it was designed and constructed as agreed in the contract and this needs to be resolved.

“Our plan is to fix the current problem and ensure the vessel is back in the water as soon as possible.

“We have no plans at this time to order a new floating bridge.”

Floating Bridge 6 was funded by a £3.5 million grant from the Solent Local Enterprise Partnership.

newest oldest most voted
peterj
So – as with the Highways PFI – after almost 4 years of his leadership, it’s still the fault of the last lot. If only he had been in position do something about it all the years since! My head-shaking continues reading this ‘perfect storm’ nonsense. Generally one uses that term of phrase when something extraordinary happens – and clearly the floating bridge being out of action… Read more »
Vote Up71-1Vote Down
Eagle eye

Roll on election day so we can rid ourselves of this Tory rabble. With all the proposed housing Mr Seely needs to step up and speak out or step down.

Cant’ we claim independence from the mainland like the Orkneys?

I’m very apprehensive about them being voted out, so many Tory voters do not seem capable of changing their allegiance in spite of the appalling record of this council.

Vote Up360Vote Down
walkingwizard
So, they hope to get appropriate damages that the council has suffered? What about all the years in the future that the bridge will still require help to cross the river during certain tidal conditions and continue to make a loss. What they need is a new bridge, designed and built by an Island company who know the area in which it operates, that will make a… Read more »
Vote Up51-1Vote Down
nickstuart
The current Conservative administration have been playing PR dominoes claiming it’s a good and reliable service since they took delivery. They fiddle the reliability figures by pretending the foot passenger tug is the same. They ignore the journey time and cost They blow money like there’s no tomorrow and they have yet to do a public investigation into why this is such a mess. Whitewashing their inability… Read more »
Vote Up300Vote Down
njb249

Ask yourself one simple question – would you buy a used car from Dave Stewart?