Over £700 in prizes have already been donated by Island businesses, including this fantastic original Isle of Wight Gansey. 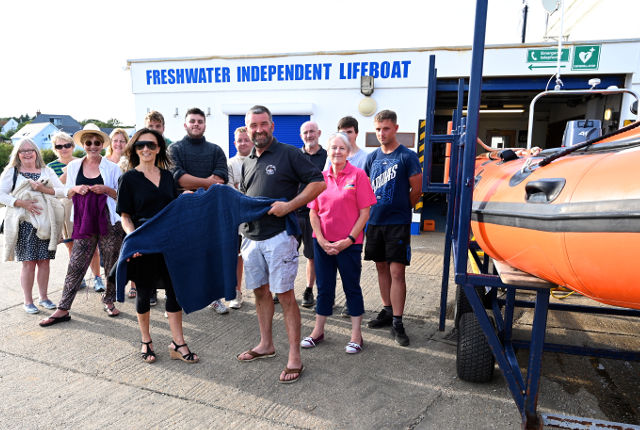 Every year the Freshwater Independent Lifeboat (FILB) runs a Grand Draw raffle and three local independent shops have joined forces to donate a specially made original Isle of Wight Gansey as one of the main prizes.

A Gansey is a traditional fisherman’s jumper.

Worth over £200 the prize is a one of a kind design featuring detailed patterns of waves, flags and the Isle of Wight and knitted from 100% recycled cotton.

“We are thrilled to support the FILB in its Grand Draw where over £700 in prizes have already been donated by Island businesses.

“With tickets only £1 each and available from our shop now and general release from 25th August we hope there will be lots of support for this fantastic fundraiser before the draw takes place on 7th December.”

Studio workshops
Variations of the unique Whistle and Hound Isle of Wight Gansey design are being taught by Gail in the shop studio every week. Since opening in April, five jumpers have already been completed with a further ten underway.

Each jumper is different where both beginners and even the most experienced knitters learn how to create their own patterns.

The classes are particularly special as skills are being passed on by word of mouth as they would have historically been shared in fishing communities. The Gansey classes are being run all year.