The Summer Series is made up of just three trials and Adult riders have to complete all three rounds to qualify for an award. 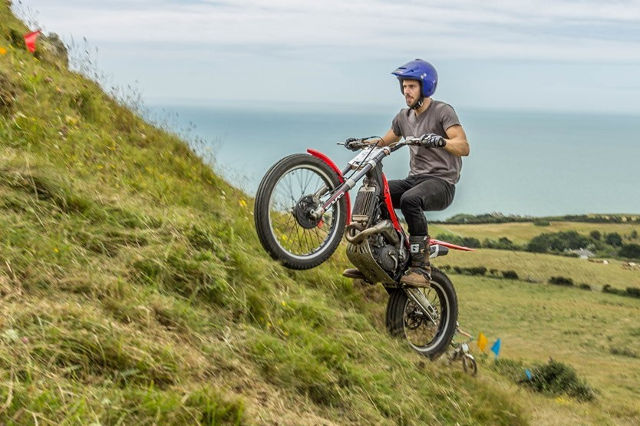 Wayne shares this latest news on behalf of the Isle of Wight Motorcycle Club. Ed

The final round of the Isle of Wight MCC’s 2019 Pat Death Summer Series Trials Championship was held on Sunday July 21st at Blackgang.

The Summer Series is made up of just three trials and Adult riders have to complete all three rounds to qualify for an award. Youth riders are exempt from the ‘all three rounds’ rule.

Hat trick for Tom
There were no Expert riders today meaning that the top honours went to Tom Richards (pictured above), who proved to be the clear winner of the Intermediate class with a loss of only five marks.

This makes a full house for Tom winning all three rounds of the series to take the Championship in style. Dan Flux had a great ride finishing in second, two marks ahead of Andy Scott-Jackson in third.

Second place for Harry
Harvey Grieve, despite a disappointing fifth place today, has done enough to lift the Championship second place cup. Rory Stephens was out on his own in the over fifty class, but despite the lack of competition he managed to finish with a very competitive total of nine. This ensured his series win.

Clubman class
Things were much closer in the Clubman class between Phil Chase and Brian Brockwell. It was Phil who took the win by just two marks – superb riding by both riders.

Novice class
The closest contest of the day – and in fact over the whole summer series came from the Novice class. Joe Taylor and Paul West were tied with one win and one second place each. The pressure was well and truly on for the decider.

It really couldn’t have ended much closer than it did. Joe took the win – by just a single mark totting up eight to Paul’s nine, amazing that after the equivalent of ninety-four sections it all came down to a single dab!

Jos Wright managed to beat Twin Shock stalwart Nick Symes with a superb ride, dropping just a single mark. Nick had an uncharacteristic maximum five point penalty on section two to finish on six. Nick shouldn’t be too disappointed as his second place today was enough for him to take the series win.

Adult Beginners
Mike True was another rider who performed very well this time in the Adult Beginners dropping just eight marks. He finished his first summer series with his first Championship win. Meanwhile Sam Jurich, in his first trial took the second place on the day.

The pick of the bunch in the Sportsman class was Scott Milton. Competing on the ‘C’ route he was the only rider to finish with a clean sheet – excellent performance indeed.

Youth class
The youth classes were headed up by Alfie Haydon (Youth Intermediate) ending the day with an impressive total of seventeen – and another Championship win.

Dan Locke, Youth Novice, finished today in some style, he dropped only three marks, all on section three, making it three wins from three – to win his third Championship title!

Youth Beginners
In the Youth Beginners young Bertie Grieve took the win from first time rider Riley True. Riley wasn’t too far off the pace, only fourteen marks behind – excellent effort by both riders.

Bertie also earns his first Championship with maximum points. Riley will probably be surprised to find out that he takes the runner up trophy for the series.

Next meet
The next Club trial will be held on Sunday August 18th. The Bighobbler Trial, held in memory of the sadly missed big man; Nigel Crouch.

If you can only make one trial every year – try to make it this one! The venue is a hit with Club riders, Pagham Farm.

Please keep an eye on the Club Website and our Facebook group, where all the important details will be published very soon.