What a legend! On Thursday, 30-year-old Paul Berry circumnavigated the Isle of Wight in rowing boat built by his grandfather more than 50 years ago. The challenge was in memory of lost loved ones and to raise money for two incredibly worthy charities. 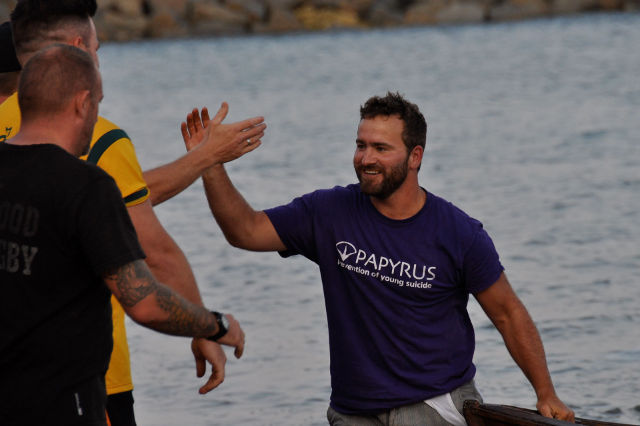 With the perfect weather conditions, months of training and the tides on his side, Ventnorian Paul Berry yesterday (Thursday) circumnavigated the Isle of Wight in a rowing boat in 15 hours and 45 minutes.

This feat, which resulted in many blisters, back ache and a very tired 30 year old has apparently smashed the former record held by the two lifeboat men who rowed around the Island a couple of decades ago.

Supported by loved ones
His younger brother, James, was by his side for the 16 hours in a support boat and his sister, Jody, followed on land to keep everyone updated on his progress via his ‘Rowing for Reason’ Facebook Page.

Here’s the moment Paul arrived back in Ventnor:

Our thanks to Trudi Bridgeman and Jeane Minx for sharing their photos of Paul’s return (due to an untimely problem with our kit). Remembering loved ones
Yesterday’s challenge was completed in tribute to Paul’s late grandmother, Rosemary Blake, who lost her decade-long battle with cancer last year and his step-father, Del Blake Bevan, who tragically took his own life one week before his 30th birthday ten years ago.

The charities to benefit
For those who are able to donate, Paul has chosen two charities to support as part of his challenge.

The first is Papyrus, who work to prevent suicide in the under 35s.

Paul is also supporting the Ellen MacArthur Cancer Trust, who support young people in building confidence after recovering from cancer treatment through sailing.

All money raised will be split 50/50 with the two charities.

Show your support
There’s still time to show your support for this amazing achievement. You can made a donation online via Virgin Money, alternatively you can text donations as below: