Dress up in your favourite decade and prizes for the best-dressed at this silent disco being held at Strings Bar and Venue in Newport this week. 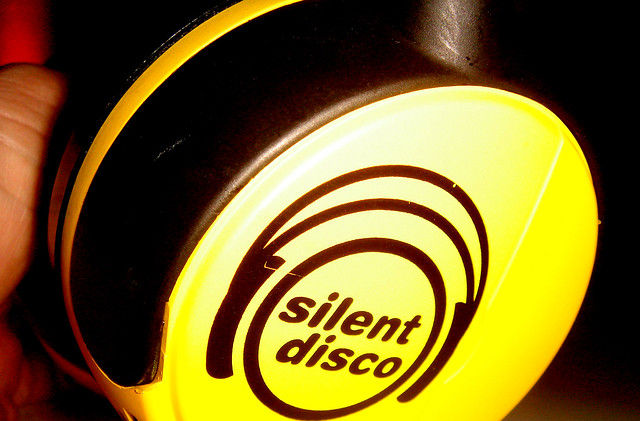 Attending a live music event wearing a set of wireless headphones is often not encouraged, but at Battle of The Decades it is a necessity.

Platform One degree students are hosting a silent disco at Strings Bar and Venue on Friday 17th May, a night that will see three DJs compete to win over the audience with popular songs from the 80s, 90s and 00s.

The silent disco battle adds a new twist to what is already an exciting event, while allowing the audience to show off their skills on the dance floor.

What’s a silent disco?
For those who are inexperienced with the silent disco concept; gig attendees will receive a pair of wireless headphones upon entry, they will then have the choice as to which decade they want to listen to by switching the channel on their headset.

Each DJ will be trying to play the best tunes from each decade in the hope that the audience will join them.

Booth: Come and give it a try
Degree lecturer, Andy Booth, supports the students’ aims to host an alternative type of live music event,

“Silent discos are certainly growing in popularity and our students were encouraged to try something different. It is evident that decade inspired nights are still enjoyed by a wide demographic and we hope those that have never been to a silent disco will come and give it a try.”

“We are all really excited to present our Battle of The Decades event and we hope to bring something fresh to one of the Island’s favourite venues.”

In addition to the wide selection of music available on the night, the audience will be encouraged to dress up as their favourite decade to be in with a chance of winning a prize.

Book now
Tickets for this one off event are £5 in advance (£7 on the door) and available from Strings Bar & Venue, Platform One or online.