The dashcam video has been watched almost half a million times in less than 24 hours and Islanders have been shocked at the actions of the driver. OnTheWight speaks to the police about what happens next. 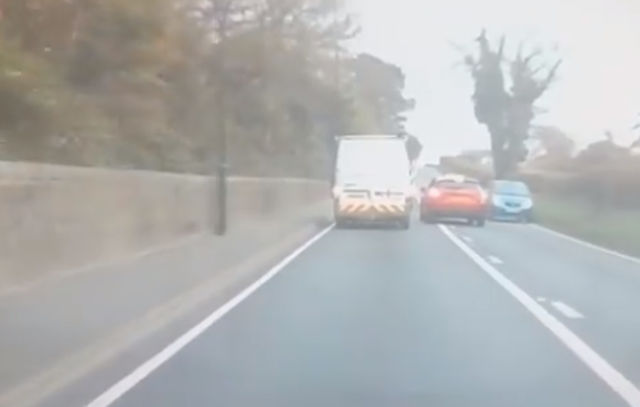 A dashcam video captured yesterday afternoon (Tuesday) whilst Jarv Stevenson was driving home from work on the Isle of Wight has been shared over 3,700 times on Facebook in the last 22 hours.

The footage – which has been viewed almost half a million times – shows the driver of a red Mazda make several attempts to overtake the vehicle ahead of them in what many people have described as a dangerous situation.

The driver’s actions eventually forced oncoming traffic to swerve to the side of the road, to avoid a head-on collision. Many comments have pointed out that the car was also crossing the solid white line when it met the oncoming traffic.

Police “investigating the circumstances”
Many of those commenting on the video thread suggested the footage be reported to the police and at least one other says they witnessed the same car make equally dangerous maneuvers the previous week on the Racecourse Roundabout.

A spokesperson for Hampshire Constabulary confirmed to OnTheWight today that they’re “investigating the circumstances”, adding,

“We received a report last night (Tuesday 19 March) that a vehicle, described as a red Mazda, had been driving dangerously on the A3054 in the Fishbourne area at around 4.50pm the same day.

The video
Language in the comments is strong, so would avoid looking at them if you are offended by strong language.

newest oldest most voted
Colin
Unfortunately bad driving is more evident these days. Today I had some little oik doing wheelies on his L-plated motorbike coming towards me on the Merstone road. One slip and he would have been under my car. I’ve had a dashcam fitted for a while now for my own protection against some of the idiots on the roads. There was plenty of footage from last years Ford… Read more »
Vote Up12-2Vote Down
iowdave

Too busy riding around in their police cars!!