38 members of the public and the policing family on the Isle of Wight were recognised at the district commander’s awards ceremony. 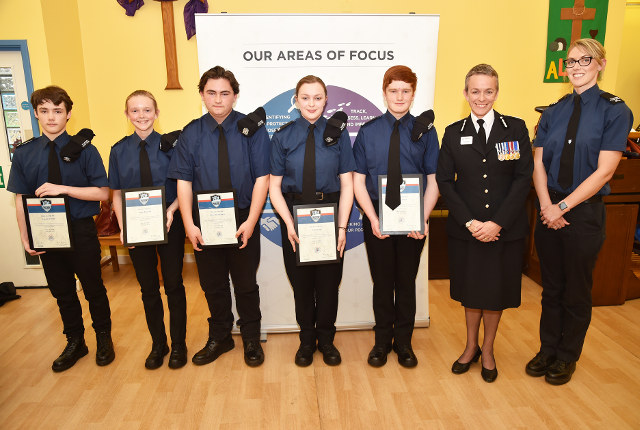 The police share this latest news. Well done to all those recognised. Ed

Chief Constable Olivia Pinkney (pictured above) and Superintendent Sarah Jackson have praised 38 members of the public and the policing family on the Isle of Wight at the district commander’s awards ceremony.

The event was held at Newport Congregational Church on Tuesday 23 April to recognise work that’s been undertaken to help people on the island.

In addition Detective Constable Adam Gamble was recognised for his role in a specific investigation.

The recognitions included one Chief Constable’s Congratulation and four Commendations, alongside the District Commanders awards.

DC Gamble’s special investigation
Superintendent Jackson presented an award to DC Gamble, who works for the Isle of Wight Investigations Team, for his work following a firearms incident on the Island.

Officers were called in the early hours of Thursday 4 October to a domestic incident at Forest Way in Sandown. A man pointed a firearm at a woman and the attending officers.

Upon arrival officers assessed the threat, harm, and risk, and utilised baton rounds (attenuating energy projectiles) to detain a 45 year-old man. An imitation firearm, a BB gun, was also recovered.

Once the suspect was in custody the investigation was allocated to DC Gamble, who was already carrying a heavy workload. DC Gamble completed all relevant lines of enquiry and the victim interview.

DC Gamble was determined to keep ownership of the investigation, to the extent that he was happy to complete a 15 hour shift to ensure that a charge and remand was secured. It was noted that DC Gamble’s submission to the Crown Prosecution Service was meticulous, helping to secure a charging decision.

DC Gamble was back on duty after only 9 hours away from work to go to court to oversee the remand application.

Commended for the thoroughness
The man was charged with driving a motor vehicle when alcohol limit above limit and possession of an imitation firearm with intent to cause fear of violence. He was subsequently sentenced to 32 months in prison when he appeared in court earlier this year.

DC Gamble was commended for the thoroughness of his investigation and for going above and beyond to secure a positive outcome for the victim.

Supt Jackson: I am so proud that the people receiving these awards
Following the awards ceremony Superintendent Sarah Jackson said:

“This is an important opportunity to reflect on the great work that’s been undertaken by my officers on the Island with support from outstanding members of the public. It’s a demonstration that the whole community works together to ensure residents on the Island are safe.

“Many of these awards relate to vulnerable people, or people who were given medical assistance by members of the public. In each case someone needed help, and I am so proud that the people receiving these awards went above and beyond to provide that assistance.

“Each recipient of these awards should be proud of their achievements. I’d like to personally thank each and every one of them for their actions and contribution to our Island.”

“I was delighted to hear about the achievements of each of the award winners and to be at the ceremony to congratulate them. Meeting the volunteer police cadets was also extremely important. They are embarking on an exciting journey.

“As they complete their education and start their careers, their experience with the cadets may inspire them to join the Special Constabulary, work as police staff, or train to become officers within Hampshire Constabulary, which will benefit communities across the Island in years to come.

“Our police cadets are just some of the many volunteers who make such a valuable contribution under ourCitizens in Policing programme. Awards ceremonies like this bring all elements of the policing family together to recognise the hard work that’s been undertaken. I was so pleased to see so many of our volunteers on the Island represented at the event.”