Popular US-style speedway meeting returns to the Isle of Wight

This style of meeting gives scope for close racing, plenty of passing, surprise results and lots of skill as the riders manoeuvre past their rivals. 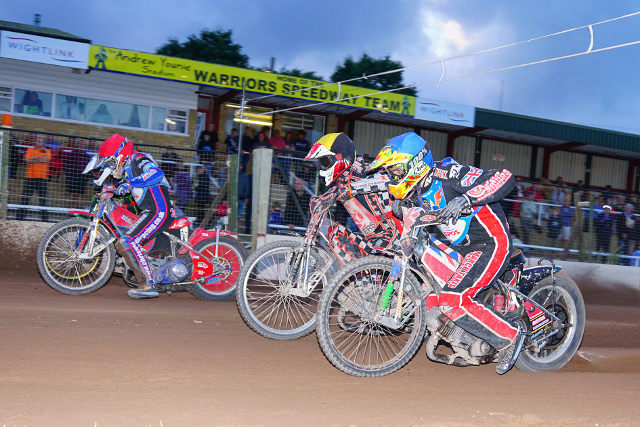 Following the success of last year’s event, the speedway action this Thursday (15 August) at the Smallbrook Stadium in Ryde sees the return of USA style racing where all the riders are graded and the those with the best grading have to chase and pass the lesser graded riders by starting further back from the tapes. This year the meeting will be known as the Wight Coast Holidays US Style Challenge.

In the past these meetings at Smallbrook have produced some amazing races as the lower grade riders battle to keep their opponents at bay whilst those in the higher grades have to exhibit all the track craft and speed that earned them the higher grading in the first place.

Bishop: One of best race nights of season
Warrior’s co-promoter Barry Bishop has had no hesitation in running this meeting again. He said,

“We love this style of meeting as it gives plenty of scope for close racing, plenty of passing, surprise results and lots of skill as the riders manoeuvre past their rivals. Last year was one of the best race nights of the season culminating in a pulsating Grand Final.

“I hope the riders can produce more of the same on Thursday especially as we will be welcoming first time sponsors Wight Coast Holidays to the Smallbrook Stadium.”

The meeting runs over twelve qualifying heats and the top eight scores on the night progress to two semi-finals from which the top three in each semi contest the Grand Final – yes, in a further twist it is planned to hold the Grand Final with six riders rather than the usual four!

On the team
A well balanced field will, unfortunately, be missing Warriors’ Georgie Wood and Danno Verge as they recover from recent injuries; however the inclusion of Championship rider Connor Mountain is a very welcome addition to the line-up and his races with Warriors skipper Ben Morley are sure to see some hectic action.

Warrior fans and others attending the meeting are asked to bring a few extra coppers as the club will be holding its annual collection for the Speedway Riders Benevolent Fund – a charity that provides financial support to British speedway riders who suffer serious and/or long term injuries.

Summer fun at the Speedway
With the weather looking to be spot-on for some summer fun at the speedway, join the Warriors as the gates open at 5.30pm, enjoy open pit access until 6.15pm, pre-meeting demonstration rides from 6.15pm ahead of the parade of riders at 6.45pm with the tapes up at 7pm.

Don’t forget that the free admission age concession is in operation and this week anyone aged 45 will be allowed free entry on production of proof of age.