The new border is required, post-Brexit, to examine lorries and their goods. It’s exact location is under wraps, but clues remain 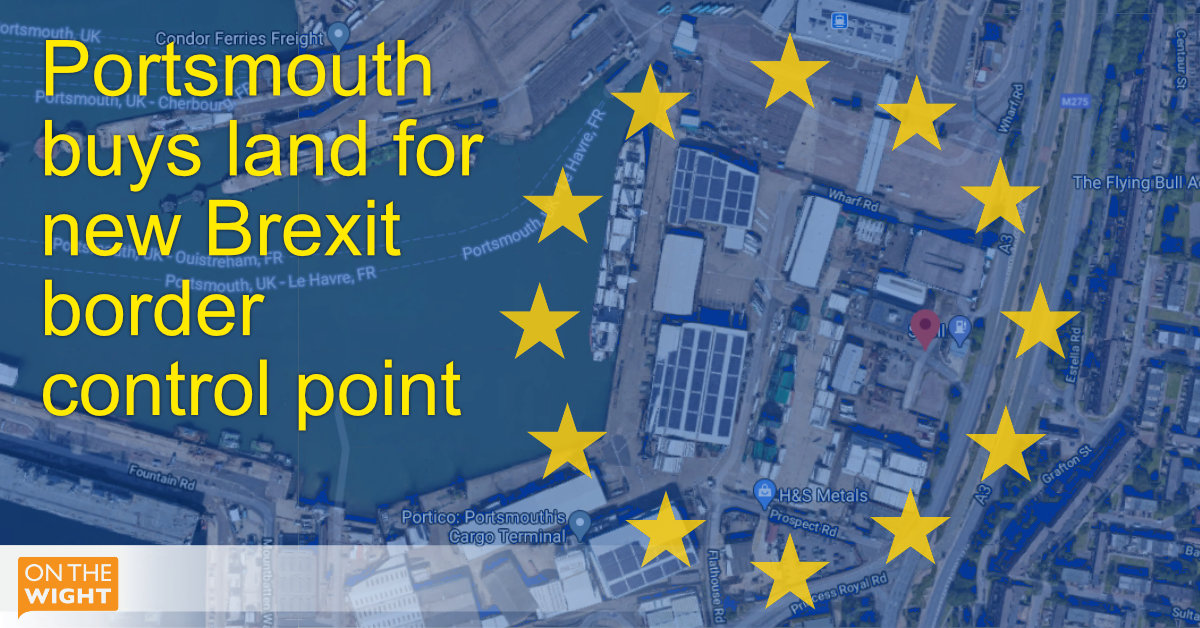 From time to time, News OnTheWight stretches its reporting beat beyond the shore of the Isle of Wight. Here’s some Brexit-related news from just across the water, in Pompey, at a site many of us pass when leaving the ferry – Ed.

The council has approved the acquisition of land next to Portsmouth International Port in the north of the city, which will ensure required border checks can be carried out as required by government from July.

Details under wraps
Details of the site, including cost, remain under wraps due to commercial sensitivity, however, it is known that it will occupy an area off Kettering Terrace near the bottom of the M275.

The decision to press ahead with the purchase was made during a council meeting on Tuesday 12th (January).

Part of the border operating model
Speaking at the virtual meeting, Tom Southall, the council’s assistant director for property and investment, said,

“Clearly this acquisition is important in terms of the preparations for the port for the border operating model. This decision needs to be taken urgently to facilitate that.”

“This is an important part of national infrastructure we are talking about and therefore we needed to make sure this came forward fast and we’ve had approval to do so from people within the council.

“This land is needed with the change in our relationship with the EU.

“We need to be able to have space to do examinations of imports coming in to the UK to make sure that things are safe and that what’s in the lorries is what’s being declared, and we’re working very closely with government to deliver this.”

Cost higher than Gov funding
However, as reported it was thought necessary adjustments to the council-owned port due to Brexit – including the border check point – would total around £25m.

The council bid for £32m out of a £200m port infrastructure fund from government last year, but found out in December it would only be awarded £17m – leaving an £8m shortfall.

“There are some funding issues but we hope we’ll get over that.”

As part of the report on the land acquisition it stated that the purchase ‘will be fully funded (including costs and fees) from the port infrastructure fund.’

Other measures to prepare the port for Brexit are already under way, including lorry checks being carried out at the Tipner triage point.