Pupils at Cowes Enterprise College took part in a day of action on Friday, with pupils voting on a range of issues, learning more about democracy and how to have their voices heard. 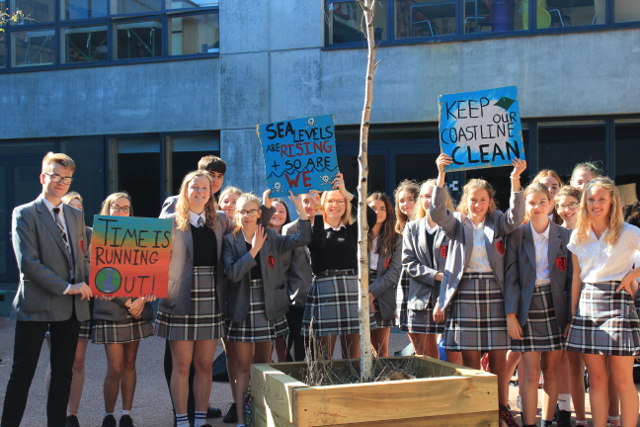 Every pupil at Cowes Enterprise College (CEC) took part in the international climate change protest day through a day of action at the school.

With the full support of staff, all pupils formally made their mark by voting on issues that matter to them at polling stations at the high-performing secondary academy, led by Ormiston Academies Trust.

Every child filled out an official ballot paper with the results then sent to UK Youth Parliament, to let them know what they think they should campaign on at national level on their behalf. Protecting the environment was a key voting option.

Having their voices heard
All 1,250 completed ballot papers were formally handed to Kieran Wetherick, a sixth former who sits on the Isle of Wight Youth Council, to pass on to the UK Youth Parliament at national level.

Ballot papers asked students to consider a range of issues including protecting the environment, votes at 16, mental health, making the United Nation Convention on the Rights of the Child statutory law.

No one too small to have a voice
Voting follows special lesson time devoted to considering the voting and democratic processes and routes to having your voice heard as a citizen of the country in response to the national strike.

Students also learnt about Greta Thunberg’s stand as part of the thinking that no one is too small to have a voice.

‘Eco Council’ plans
Meanwhile at the academy, the first ever ‘Eco Council’ took place at the hour of the strike for those students who want to actively participate in protecting the environment in the long term.

Students taking part in the conference put together their plan of action to have their voice heard through a long term campaign of social action and letter writing to politicians.

Be the change you want to see
CEC has long believed in the power of student voice and ensuring all children have voices at the academy. Students run the academy’s Instagram account, write and read the news weekly as NewsHounds for the Isle of Wight Radio and every student in years 7 to 9 is involved in environmental social action projects through the curriculum this year.

CEC encourages children to ‘be the change they want to see’ and to lead the way on making their education count in bringing about change.

Students have also launched their new ‘Eco Council’ and rather than leaving school to take part in the strike instead wrote letters inviting the Secretary of State for the Environment, Theresa Villiers, to visit the academy so they can hold a conference with her.

“It was wonderful to see such an incredible display of democracy in action at our academy.

“Every single pupil took part and it was a brilliant way for pupils to show their social awareness and learn about what is such a timely and crucial issue.”

CEC, you are a beacon for ALL schools on the Island to learn from.

Very helpful, ask primary school kids next, playgroups it their future after all.

Vote Up2-1Vote Down
Tamara
Newport C of E Primary School brought some very young pupils to the Schools Strike in Newport on Friday. They were invited to make their hand-print in green paint on a giant skull. It was a poignant reminder that these children’s lifespan will cover the rest of this century, that it is their future that world leaders and politicians should be striving their very best to safeguard.… Read more »
Vote Up1-1Vote Down