OnTheWight will be covering Wednesday’s mysterious announcement *live* (so make sure you tune in). Just for fun – What do you think it is? 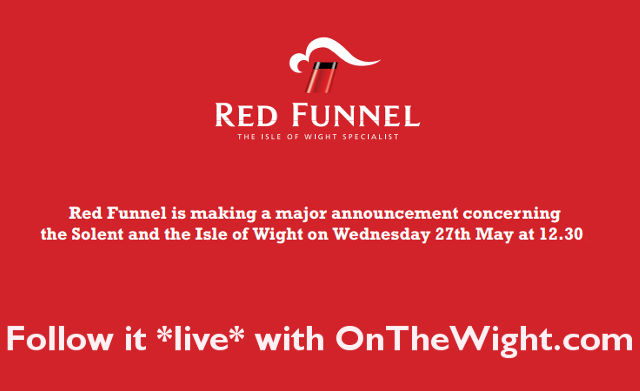 Red Funnel has distributed a flyer to the media about an event they’re holding at 12:30pm (lunchtime) tomorrow (Wednesday).

It’s all terribly mysterious, only having the following text:

Red Funnel is making a major announcement concerning the Solent and the Isle of Wight on Wednesday 27th May at 12:30.

Watch it live with OnTheWight
As you’d expect, OnTheWight will be covering it live, as it happens, so grab yourself a cup of tea/ a glass of squash / sandwich / 14-course banquet and come back to our site at 12:30pm to see what’s going to be unveiled.

What’s your guess?
As to what it’s about, well Red Funnel are remaining very tight-lipped, not even giving the slightest hint, even when prompted.

Just for fun – What do you think they might be announcing?

Either moving the terminal, renaming the company or a new boat

All Island residents to have free travel!

They’re going to have more than one server at the bar when the ferry is packed out so you can get a drink before it docks at the other end.

Or, maybe they have bought Wightlink, and plan to merge, bringing us a whole new level of customer service and pricing pain.

Are they going to start calling Cowes by its actual name? #overdue

It’ll probably be quite mundane, a change of berth in Southampton perhaps, but might they be tempted to trial a Cowes-Portsmouth RedJet?

its the new boat being unveiled

I noticed they did that in the comparison website advert with the irritating robot.
I don’t find the general public especially annoying but I tend not to eat the food as it is too expensive.

Vote Up00Vote Down
I do not believe it
Red Funnel are delighted to announce that, after long secret negotiations with government, excavations will shortly commence to build a canal from Newport Harbour to Ventnor thus effectively splitting the island into East and West Wight. The canal design will reflect all the best aspects of both the Suez and Panama canals and will enable Red Funnel to operate a fast and geographically direct Red Jet service… Read more »
Vote Up00Vote Down
Simon Perry

Red jet 6 and the builder will be a iow based company, hoping to show that they support local buisness! You herd it here first!

They rather jumped the gun early this morning, with one of their ‘special announcements:

In partnership with VBG & Visit IOW: gardens on all ferries, Cowes harbour breakwater to be given a desert island makeover, extension of guerilla gardener’s work at Frank James site to create new island gateway garden attraction?

With regret, we announce the cancellation of 12:31 sailing…

Vote Up00Vote Down
dennisthegrockle
My guess; in common with the council Red Funnel will make you pay to park while you await the ferry! It will take more to stop us coming over so often, but with exorbitant ferry costs and very few places to stop without high parking costs, how many other visitors will be put off? Oh also finding toilets still open. We feel for islanders too. So happy… Read more »
Vote Up00Vote Down
retired Hack

Redevelopment of East Cowes site; Red Jet operation transferred to East Cowes. Why bother with three terminals when two will do?

To speed up ferry service fares collected whilst on-route. No payers asked to leave immediately.