Thanks to Pete Fellows for this report from the first meeting of the Isle of Wight Orchard Group.

Thanks to Peter Fellows for this report from the first meeting of the Isle of Wight Orchard Group. In his own words. Ed 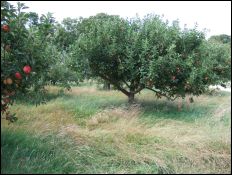 Orchards: they’re beautiful, they’re great for wildlife, and they protect soil, water and climate. Moreover, they produce delicious, healthy fruit and nuts. But most of the orchards that Britain had only a few decades ago have now disappeared as a result of changing agricultural practices and the pressure for development land.

People around the country who care about orchards have been getting together in orchard groups to champion orchards, and now the Isle of Wight has joined in.

30 turned out for first meeting
About thirty people met in the Hunnyhill Room at the Riverside Centre on Thursday evening, 19 May, and many other people who couldn’t make it have asked to be kept posted with news of the group.

The meeting was called by the Heritage Lottery funded West Wight Landscape Partnership (WWLP) who have already organised fruit pruning workshops and helped the People’s Trust for Endangered Species to find and train volunteers for their survey of traditional orchards.

West Wight Landscape Partnership offers support
Pete Fellows of WWLP opened the meeting and said that if people wanted to form an Isle of Wight Orchard Group, then the Partnership would be willing to do what they can to support them.

Rowan Adams gave a quick overview of some of the things orchard groups can do, from recording existing orchards and protecting them from threats, through management, conservation, education and celebration, through to harvesting and sharing unused crops and creating new orchards.

Most of the meeting was an open discussion, with lively debate over whether the priority should be to look after existing orchards or to create new ones or both. The group decided to meet in another four weeks’ time.

Next meeting, register attendance first
Two of the people at the meeting volunteered their garden for the meeting on Thursday 16 June.

As it’s a private garden, please contact WWLP if you want to come along, and you will then be given the details. Call 759779 or email [email protected]