Floating bridge runs at a profit, ‘so why charge’ ask residents?

It was reported again last night that the Floating Bridge in Cowes runs at a profit and is not being paid for by council tax payers. Residents had a chance ask questions and share their view of the proposed introduction of foot passenger fares. 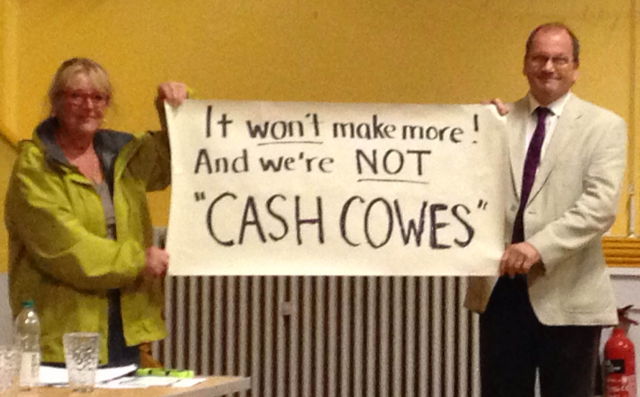 Around 100 residents turned out for the public meeting organised by Cowes and East Cowes Town councils last night (Thursday) to hear about and share their views on proposals by the Isle of Wight council to introduce foot passenger fares on the Floating Bridge.

The meeting kicked off with a presentation from an East Cowes resident, who highlighted a series of facts about the floating bridge and summarised a number of flaws in the council’s calculations of how much income introducing foot passenger fares will raise each year.

Bridge runs at a profit
As previously reported through OnTheWight, the floating bridge currently makes a profit each year, paying for its own running as well as the surplus going towards other services around the Isle of Wight, such as street cleaning, beach cleaning, ground maintenance etc.

Those presenting were keen to point out that Islanders’ council tax DOES NOT contribute to the running of the floating bridge.

They argued that introducing foot passenger fares would be forcing a local tax on residents of Cowes and East Cowes. Adding that they’d be contributing to a service whose profits go towards supporting other services across the rest of the Island.

Due to confusion of figures from the council the amount of annual profit could not be reported accurately, but it was thought be be somewhere between £140,000 and £250,00 each year.

It was pointed out that attrition rates of around 20% were likely if charges were introduced and this would directly affect the well-being of local economy.

Could cost the council a huge amount
As has been reported through OnTheWight previously, it was suggested the council’s calculations had also not taken into account those with free bus passes who may choose to travel between Cowes and East Cowes (via Newport) by bus, instead of paying to use the floating bridge.

As the council pays for each journey pensioners with free bus passes make, one bus trip from East Cowes to Cowes and back again could cost the council around £12, plus the £1 they estimated they’d receive if the resident paid the 50p each way on the floating bridge.

Incorrect figures included in consultation
According to councillors later in the meeting, these arguments had been presented to the Isle of Wight council several times, but were informed the figures would not be changed until after the public consultation.

One councillor, opposed to the proposal, argued that by not correcting the figures before the consultation begins, residents will be giving their views without being in receipt of the full facts.

He assured residents that in his capacity as chair of the Scrutiny Committee he would make sure that the consultation is closely looked at and the administration would be held to account.

Public have their say
The floor was opened to residents to ask questions.

Why are they raising the fares? Why did the council stop charging before? How can I afford to use my benefit money to take my child to school? Why are there 3-4 members of staff running the bridge? Why should we pay an unfair tax that benefits the rest of the Island? were just some of the questions raised.

Passionate plea from 15 year old
Fifteen year old Lana Viney from East Cowes spoke passionately about hers and other young people’s concerns over the proposed charges.

She recognised that under 18s would go free, but was worried that her mother – struggling to get by – would be hit by having to pay foot passenger charges.

Lack of leadership
Although there were several Isle of Wight councillors present at the meeting – Cllrs Baker-Smith, Hillard, Nicholson, Lumley, Ward and Peacey-Wilcox – Cllr Hillard was the only member of the council leadership present.

As the meeting drew to a close, residents were urged to make sure they told as many people as possible about the upcoming public consultation and to let the Isle of Wight council know their strength of feeling against the introduction of foot passenger fares.

13 Comments on "Floating bridge runs at a profit, ‘so why charge’ ask residents?"

Shocked that Margaret Webster would recommend raising Council Tax when she previously froze it for 3 years… meaning the Council is an estimated £6 million worse off now. Bit of a U-turn!

Yes it is the sort of suggestion you would expect from a Labour Councillor not a Tory. If the service makes a steady profit then why is this being debated at all, especially when the Island has received a grant to pay for the new floating bridge, or is it that the council hasn’t really got a clue whether or not it pays its way.

Apparently the profit is used to pay for other services because its not ring-fenced. It goes into the pot. So if the profit was used for the bridge (or set aside as it should be) then the Council would have to find that money from elsewhere or make cuts.

You shouldn’t be too surprised MamaLU. It’s a typical Tory thing to do. Cut and cut again – then try to deflect the blame elsewhere and hope that it’ll take the electorate in; it won’t and that’s why the voters kicked her out.

Vote Up00Vote Down
BRIAN
“They argued that introducing foot passenger fares would be forcing a local tax on residents of Cowes and East Cowes. Adding that they’d be contributing to a service whose profits go towards supporting other services across the rest of the Island” So what are Islands motorists doing then when they pay to use the service? What they are saying is they don’t mind motorists (as always) paying… Read more »
Vote Up00Vote Down
tiki

Why should motorists have to foot the bill! We used to pay 20p and there were no issues with collection. People want everything for nothing these days. Less than a 100 people turned up to that meeting, what’s the population of East / West Cowes? We can assume that the other 30,000+ don’t care less. Notably absent were half the Cowes Town Council.

I think one of the other points made at the meeting was that charging money might not raise more money for the Council!

Vote Up00Vote Down
davidwalter
wighton — The point I carried away with me from the meeting is not only will the takings be lower for a number of stated reasons, the net effect on the IWC would be very negative given that anyone with a Seniors’ Bus Pass, choosing to bus round or to Newport instead, would cost the Council between £6 and £12 per day! For those who live a… Read more »
Vote Up00Vote Down
Michael Douse
Yes David I agree,but the point I carried away was the information that the IW Council Officers do not know exactly what the revenue streams are from the Floating Bridge. Income could be somewhere between £800,000 and £650,000! Profit could be somewhere between £140,000 and £250,000! Doesn’t someone count the money and write it down somewhere and doesn’t someone else maintain an audit trail? There is only… Read more »
Vote Up00Vote Down
JohnR
As far as I can make out from the press reports and further comments from those at the meeting it adds up to the simple fact that. (a) The Council are supposed in the real world meant to be running a business of sorts with funds from the tax payers, rates and fares etc and can’t even keep an accurate set of figures for income and expenditure… Read more »
Vote Up00Vote Down
garageelfiniow
The matter of accounting for this service is very simple – for some reason however elements in county hall ( no doubt highly paid unelected officials) wish to hide the true numbers for their own ends. A quick ring around some of the local accountants on th Island on monday morning will reveal the cost of professional accounting services for a ‘business’ of this size. I wager… Read more »
Vote Up00Vote Down
Colin
Do the council know or care about anything? Parking charges make an annual profit of about £2 million, but it doesn’t stop them wanting more. The council have squandered our money for years on their pet projects and expect everyone to cough up for their upkeep. It is their ineptitude that has ruined the island. The sooner we become part of Hampshire the better. Their petty squables… Read more »
Vote Up00Vote Down
tryme

So is Hampshire the land of milk and honey then?
You mean … there aren’t any forums there like this one, complaining the Council isn’t doing a good job? Fabulous!
Unless, (dear readers), you know better …