The Bash was given a seal of approval on Tuesday from the man who revived the IW Festival in 2002. Tickets still for sale, grab them while you can. 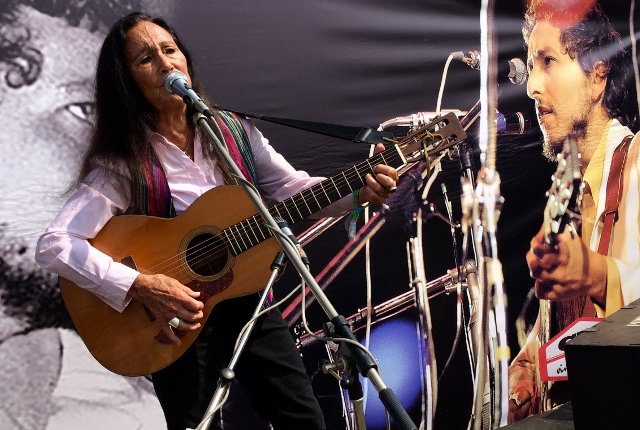 Bill shares this latest news on behalf of All Wight Now. Ed

It’s the summer of ’69 again on the Isle of Wight as preparations for the Million Dollar Bash festival at the weekend go into overdrive.

The Bash is a one-day event on Saturday (31st August) to celebrate the 50th anniversary of Bob Dylan’s iconic appearance at the 1969 Isle of Wight Festival of Music. And on Tuesday folk legend Julie Felix led a gathering on the ’69 festival site in Woodside Bay, Wootton.

Julie – who played shortly before Dylan hit the stage half a century ago – travelled from her Hertfordshire home to the site. She was joined by Island artist Alex Williams, who has just completed a new oil-on-canvas painting of Dylan performing on the Island, and rock’n’roll sculptor Guy Portelli with two works inspired by the festival.

They came together in front of a backdrop of original 1969-70 IW Festival sound gear and mixers presented by CH Vintage Audio, including a larger-than-life backdrop of Dylan performing at the festival.

Felix: Should be a lovely anniversary event
Julie sang several songs including Dylan’s Chimes of Freedom. She said:

“It’s incredible to think I am back on the site where I performed all those years ago alongside some wonderful artists, including Bob Dylan, of course. And – incredibly – I am playing through the same sound system, too!

“I’m looking forward to playing at the Bash itself on Saturday, it should be a lovely anniversary event. I’ve said that the Isle of Wight in 1969 was the aristocracy of festivals – it was a wonderful time and this is a chance to pay tribute and create new memories.”

Giddings: Come gather round people
The Bash was given a seal of approval on Tuesday from the man who revived the IW Festival in 2002, promoter John Giddings. He said:

“It is great to honour the 1969 IW Festival. Without Bob Dylan, the Isle of Wight would not be so famous worldwide.

“His appearance helped create an iconic event which we are proud to follow in the footsteps of.

“Come gather round people…good luck to the Million Dollar Bash for Saturday.”

Vintage equipment
To complete the scene, Chris Hewitt, of CH Vintage Audio, had his musician son Tom Hewitt on hand, dressed as Bob Dylan circa 1969 IW in white suit and yellow shirt, chipping in with a Dylan song or two.

Get your tickets now
Tickets are still available online at allwightnow.com  at £44 or discounted Island tickets (£40) are available from That 60’s Place, Cowes High Street, or Dimbola Galleries and Museum, Freshwater Bay.

Under-18s are half price and under-10s go free. Cash sale at the gate will be possible on Saturday when the event runs from 11am-11pm.