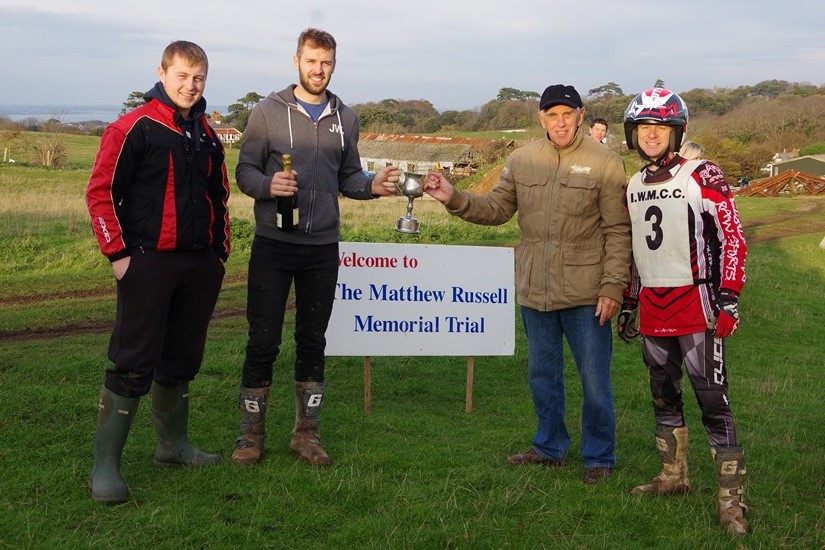 The Isle of Wight Motorcycle Club held the annual Matthew Russell Memorial Cup trial on Sunday 17th November at Nodewell Farm, Totland. The Club would like to thank the Morgan Family for the use of the venue, Ross and Alfie Haydon along with Josh Morris for eight top sections.

We would also like to thank Gill Locke for capturing all the action with her camera, the Observers and Geoff Taylor – Geoff stepped in at short notice to sign the riders on and officiate as Clerk of the Course – superb team effort people.

New members
The Club would like to extend a very warm welcome to three new members; Jack Ayres, Adam Morgan and Daryl Biles. Jack is no stranger to trials and its great to see him back on a trials machine riding with us after a break of far too many years.

We hope they all had a great time and we look forward to seeing them again soon.

The ‘Matt Russell Cup’
Matt Russell was a popular and a well-liked member of the Club. He was an accomplished Intermediate class rider who tragically and suddenly lost his life at the age of just twenty-nine.

The ‘Matt Russell Cup’ is awarded annually to the best Intermediate rider at this trial. Matt’s Dad; Tony Russell, was on hand to present the Cup to this year’s Intermediate winner – Tom Richards.

Tom put in an amazing performance on the tricky sections to cross the line with a loss of only eight marks. Presentations were also made to Ross Haydon (2nd) and Ben Read (3rd) who dropped thirty and thirty-two respectively.

Things were very much closer in the Expert class, in fact Jack Ayres and James Stay were tied on thirty-one a piece. Jack was awarded the win for notching up twenty cleans to James’s fifteen – very good effort by both riders.

Clubman class
Meanwhile over in the Clubman class it proved to be a successful return to trials for Adam Morgan – he completed the trial for a loss of thirty-eight, twenty-six ahead of nearest rival Phil Chase.

Daryl Biles posted a very good seventy-three to take the third spot. Colin Brodie finished in fourth – it was great to see Colin fit enough to compete after a recent crash forced him off the bike for several weeks.

Paul Kent dominated the Novice group of riders finishing on just five marks – the lowest score of the day.

John Coombes held on for the second place by two marks from Championship leader; Joe Taylor who was forced to settle for third spot on this occasion.

Youth riders
It was good to see five Youth riders in action this afternoon, headed up by Josh Morris in the Youth Expert class. Josh managed to hold off a determined challenge from Dan Locke to claim the win.

Alfie Haydon was out on his own in the Youth Intermediate class but
despite this he posted the second best score on the B and C route – beating all but one of the adults! Alfie Gaskin also put in a superb performance to take maximum points in the Youth Novice’s – Excellent riding lads.

Next meet
The Club next meet on Sunday 1st December for the Duver Cup. The venue is still to be confirmed, please keep an eye on the Club Website where all the details will be made available once finalised.