The mammoth cycle challenge has raised over £30,000 for the Ellen MacArthur Cancer Trust, a national charity that supports young people aged 8-24 in rebuilding their confidence after cancer. 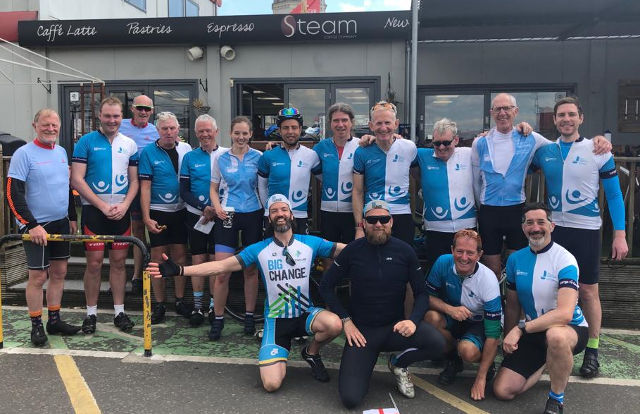 Isle of Wight-based DJ Rob da Bank conquered epic 1000km cycle setting off from Largs on Scotlands West Coast and arriving in Cowes on the Isle of Wight on Sunday (May 12) helping more than 46 young people re-engage with life after cancer.

The 45-year-old producer and festival promoter was among 11 core riders taking on the inaugural nine-day Largs to Cowes Charity Cycle in support of the Ellen MacArthur Cancer Trust, a national charity that supports young people aged 8-24 in rebuilding their confidence after cancer.

Charity ambassador for seven years
When treatment ends the Ellen MacArthur Cancer Trust’s work begins, as for many young people picking up where they left off before their diagnosis just isn’t possible. Rob has been an ambassador at the charity since 2012 and admits meeting the young people the trust supports inspired him to take on the challenge.

“Whenever I spend any time with the young people I realise there’s a much bigger picture out there in the world than our often selfish personal lives. It’s such a crucial charity for changing young people’s lives.”

Marine Ecologist, Séamus, wanted to take on the challenge to mark his 50th Birthday, a keen distance cyclist he decided to push himself even further by starting in John O’Groats before joining the rest of the core riders at the Trust’s base in Largs on Saturday 4 May.

Other riders joining the challenge
They were joined by different day riders on each leg, including several young people who have been supported by the Trust who shared their stories with the core team reminding them of the positive impact they could make.

Through the Trust’s sailing and adventure trips, young people are empowered – physically, mentally and emotionally – as they make friends with others who have been through the same thing, rediscover their independence and learn new skills.

This was a huge challenge for the core riders but especially for Rob who only recently learnt to ride a road bike, he didn’t even own his own and trained on borrowed bikes. There were some extremely steep climbs especially through the Lake District where they had to tackle Britains most famous cycling climb the Kirkstone Pass. With an Altitude of 1,489ft, it’s definitely not for the faint-hearted.

“I knew this was going to be a challenge but mentally and physically it was up there in my upper limits… But it’s nothing like the struggles and situations the young people we’re raising money for at the Trust, which was a constant  reminder to stop feeling sorry for myself and power through.”

Fletcher: Over £30,000 raised
Trust CEO, Frank Fletcher joined the last leg cycling over 91km from Midgham to Cowes he said:

“This has been an incredibly enduring challenge and we’re so grateful to the riders and everyone who has supported them, they have raised over £30,000 which will give more than 46 young people the chance to set sail on a first time trip thanks to their incredible efforts.”

Rob enjoyed the sense of achievement from completing a challenge of this scale, prior to this he had not cycled much further than the village shop. He said:

“I’d like to say it was fun while it lasted, but it was exhausting, wet and cold… but whatever travails we went through are the tiniest pinprick compared to what the young people we were riding for have either gone through or are still forging ahead with.”

“I was looking for the challenge of completing a long consecutive cycling event for a while and doing it for a such a worthwhile cause was the perfect way to mark my 50th birthday year, I’ve managed to ride 1,940 km or 1,206 miles (That’s 332 miles longer than official John O’Groats to Lands End ) and climbed 22,141 m or 2.5 Everests!”

MacArthur: A wonderful achievement that will help make a difference
It was an emotional reunion as the riders crossed the finish line to be welcomed back by their family at the Trust’s base in Cowes. The Trust’s founding patron Ellen MacArthur was there to personally thank the core team.

“This was a  great adventure for the riders and a wonderful achievement but the most special thing is the difference it will make to so many young people, helping them to transform their lives and look beyond cancer.”

Every day at least 11 children and young people in the UK are told they have cancer. Thankfully survival rates are increasing, but for every young person the Ellen MacArthur Cancer Trust works with in recovery there are nine we can’t. Yet.

Head over to the Website to make a donation.