If you love the thrill of fast boats, here’s a date your diaries. Head to Cowes on 5th and 6th September. 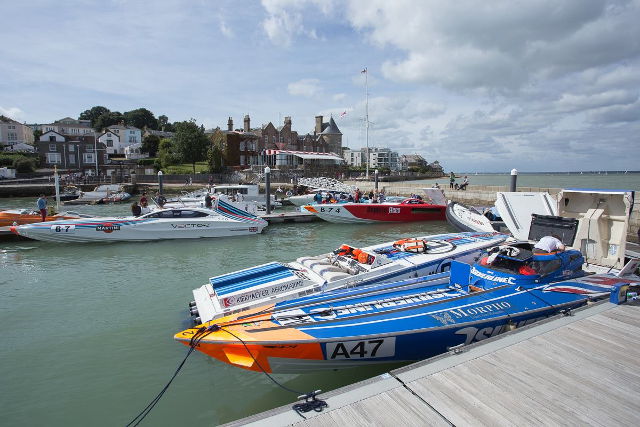 Thanks to Malc for this update on the Cowes Torquay Cowes Offshore Powerboat Race. Ed

To coincide with the 200th Anniversary of the Royal Yacht Squadron (RYS), the British Powerboat Racing Club (BPRC), the organisers of the Cowes Torquay Cowes Offshore Powerboat Race, have announced that the start line of their 2015 event will be from the Squadron.

The 200 year old club’s start line has seen the beginning and end of many of the world’s greatest yacht and power boat races.

Rob Andrews who will be the race Officer of the Day for a sixth consecutive year commented,

“I am absolutely delighted that we can give the Cowes locals, spectators and our racers such an amazing spectacle as they cross the line at full speed this year, I need to thank all those that helped to make it possible.”

The race will be held on Sunday the 6th September with a start time of 9am.

This year’s fleet will assemble at the Cowes Yacht Haven on Saturday 5th September for technical inspection, and the public are welcome to watch adjacent to the North Basin, as the crews complete their last-minute preparations.

Activity will commence at approximately 08:45 on Sunday 6th September when the racing fleet will muster to the east of Cowes Harbour entrance.