Sarah shares this latest report of races that members of Ryde Harriers have taken part in. 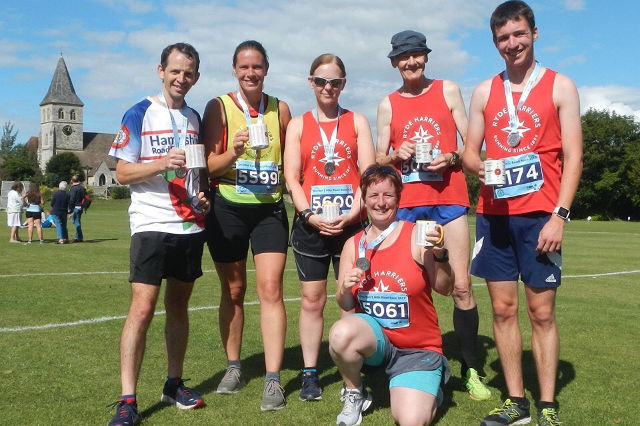 Sasha Levrier and partner Tom Brading entered the Andover Trail Marathon. With a maximum elevation of 280m and some long, fast downhills, the pair (running together) achieved a time of 5:27:17.

Meanwhile, a slightly shorter distance in the form of the Overton Five Mile Road Race was undertaken by the remaining six club members who travelled to North Hampshire to join over five hundred other athletes for the first event of the new Hampshire Road Race League season.

A picturesque yet undulating course organised by Overton Harriers and Athletic Club.

Men’s captain Trevor McAlister was awarded the coveted HRRL T-shirt having completed all twelve of the previous season‘s races whilst Natalie Rose, Carolyn Ward, Sarah Probert, Steve Lee and Keith Ruth were presented with mugs having competed in seven or more races.

All travel sponsored by Wightlink.

Report shared by Sarah on behalf of Ryde Harriers. Ed