Inspired by Bristol’s “Park and Slide”, the giant water slide is coming to the Isle of Wight. First to Union Street in July, then Bestival in September. 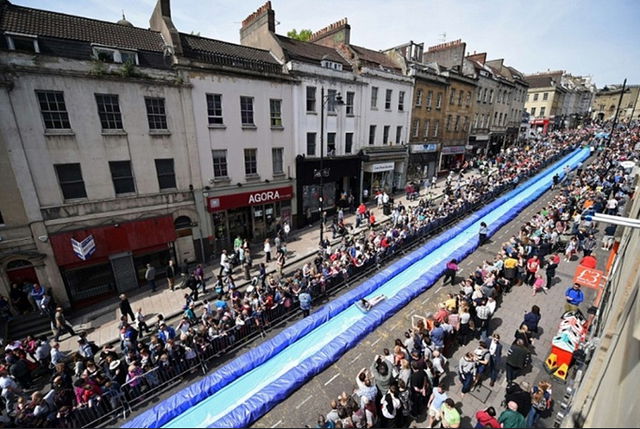 This in from Bestival HQ, in their own words. Ed

They said that it would happen and now it’s a reality, the Bestival Ryde Slide is coming to the Island this summer!

A 200 metre thrill seekers’ delight, the exhilarating giant inflatable water slide’s arrival in Ryde’s main shopping street this July has been made possible by a collaboration between the former Mayor of Ryde and Bestival. 300 lucky Islanders will get the chance to take part in the community event, which will raise money for local charities.

The picture was sent to Wayne on Twitter captioned ‘can’t you make this happen Mayor?’ Wayne noted that the Bristol water slide’s location looked very similar to Union Street, and he has been pushing for the event ever since. Now, we’re happy to say, it’s finally here!

Hatched a plan
Bestival head honcho Rob da Bank cycles past Wayne’s café on Ryde Seafront often (Rob da Bike as Wayne calls him) and together they have hatched a plan to bring you a 200m giant water slide on Union Street in Ryde, this Summer of Love!

“We always like to get involved with really exciting and really mad stuff at Bestival, so when Wayne spoke to me about bringing a huge inflatable water slide to the Island and running it down the middle of Union street in Ryde, I couldn’t possibly refuse.

“Chances like this don’t come along all that often and it’s all for a lot of great causes, so please do donate some money and see how you get on with the luck of the draw!”

“Ryde; The Town on The Beach is a unique place that deserves a unique event. Union Street is the perfect venue, thanks to Bestival’s help and the community’s enthusiasm and assistance, it’s finally all downhill from here.

“I can’t wait to join in the fun on the 12th, there’s no better way to fund raise. Oh we do like to be beside the seaslide!”

For a chance to be one of the lucky water sliders on 12th July, entrants will be asked to donate £5 to local charities via www.bestivalrydeslide.net or text BEST001 to 70970 (which will also donate £5) before 30th June, they will then be entered into a draw and 300 winners will be picked at random and notified on 1st July.

Head to www.bestivalrydeslide.net or text BEST001 to 70970 and donate now to be in with a chance to be one of the lucky Bestival Ryde Slide riders on 12th July.

Heading to Bestival
But that’s not all, the Bestival Ryde Slide will also be making a triumphant return to the Island with a very special appearance at Bestival this September 10-13 at Robin Hill, adding even more madcap adventure and unique aquaplaning joy for Bestival-goers at our Summer of Love, keep an eye on our website, Facebook, Twitter, Instagram & Tumblr for more details coming soon.

Image: brizzlebornandbred under CC BY 2.0

newest oldest most voted
Feed me!

I love this idea, but I can’t help but think, whose ego at Bestival is being fed by them doing this announcement today, the day that Isle of Wight festival starts?

Vote Up00Vote Down
Luisa Hiillard
It’s a great, fun idea – for locals, tourists and charities – but I find it difficult to believe that Island Roads/Council have given their consent for this because I know how long it is taking just to get a Licence to install a sculpture in my town, let alone a water slide on the public highway… I assume that a Licence has been granted? There will… Read more »
Vote Up00Vote Down
Bob Seely