Sainsbury’s respond to the news of the incident that took place at the weekend. They blame strong winds for the falling metal incident.

Following our earlier report of an incident that took place at Newport Sainsbury’s over the weekend, we’ve now had a response from Sainsbury’s HQ. 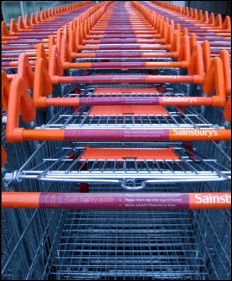 A spokesperson for Sainsbury’s said, “We take this incident very seriously and the matter is being investigated by all parties concerned.

“We are in touch with the customers affected by the accident and apologise unreservedly. The incident appears to have been a result of a lighting column falling in strong winds over the weekend.

Other lighting columns checked immediately
Many readers expressed concerns (on VB and Facebook) for safety at the supermarket given the construction site being so close to the public car park.

The spokesperson from Sainsbury’s went on to say, “All other lighting columns around the store were safety checked immediately and are securely braced.

“We would like to reassure customers that our car park is safe to use.”

Image: © Used with the kind permission of Oblivion Head

Not good enough Sainbury’s. It’s not unusual to get high winds this time of year. If work to lighting columns is not complete the public should be kept well away. Of course this would probably reduce the numbers that can use the store. any connection??

i think Sainsbury,s have done a good job with this ,at times it seemed there were more guys directing traffic than working all very helpful and polite

Agreed, not good enough. I dont know the details but I’m assuming that this was dropped from a height, from scaffolding? if so where was the catch netting? if handling materials at height in close proximity to the public this should have been addressed. HSE is often slammed but this is the sort of eventuality that it should cover.

Vote Up00Vote Down
Jef
I was on the new top deck when the incident happened, there were no high winds, certainly not strong enough to blow a 6 ft steel qirder off the deck onto cars, didn’t see many people running around checking lighting columns either! Plenty of workmen standing looking at the hole in the car!! Sainsbury say thier car park is safe to use? I think they said that… Read more »
Vote Up00Vote Down
Mr J

The winds on Saturday were strong enough to sink a ship bound for Cowes thou?

Regarding sainsburys comment on how 2 cars got damaged on saturday. I think somebody isnt telling you the truth.

Presumably Sainsburys have formal Risk Assessment documentation from their contractors for this work plus their own site management requirements.

These would all make for interesting reading. FoI request anyone?