Sandown & Shanklin RFC put in good performance against the odds

An enthralling game played in the best manner by both sides, with the only sour note being the Hurricanes could not manage bring any tangible points home with them. 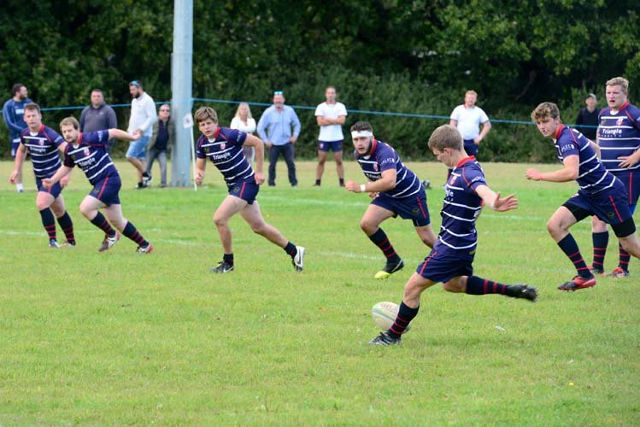 Fordingbridge 38-19 Sandown & Shanklin RFC
Last time out against Fordingbridge, the Hurricanes managed to come from behind to defeat the hosts in the Hampshire Plate. Keen to repeat the feat, factors working against the Hurricanes made this a more difficult task, but would not dampen the mood!

Following another weekend of cup exploits, Sandown & Shanklin returned to Fordingbridge RFC for League action. Having already visited the hosts a few weeks beforehand for the first round of the Hampshire Plate, it wouldn’t have been amiss to say that the hosts fancied revenge after being knocked out of the Plate. With a weakened, and just the sole 15, the hopes weren’t as high for the Hurricanes as they were the last time they travelled away to Fordingbridge. Nevertheless, despite a slight chill, it was a perfect afternoon for rugby in the New Forest.

Fordingbridge gained control
The opening exchanges from the start were relatively even, as both sides probed the opposition defence trying to find a gap. Following a spate of penalties, the home side elected to kick three penalties, as they could not break down the Hurricanes defence within their 22.

With Fordingbridge gaining control of the scoreboard, and having slightly better territory, their pressure was soon converted into the first try of the game, as the hosts managed to get around the Sandown defence.

With the try not converted, this presented Fordingbrigde with a commanding 14-0 lead with 15 minutes remaining in the half.

First score of the game
With the game slowly slipping through the hands of the Hurricanes, and momentum firmly in the favour of the hosts, a glimmer of hope was provided by fly half Cameron Mitchell.

A quick defensive push and even quicker foresight from the stand-off saw him collect an intercept pass and sprint under the posts for the Hurricanes first score of the game. With Tom Borrer duly adding the extras, 14-7.

Against the odds
As the second half restarted, Fordingbridge sought hard to put the game back in their favour, firstly scoring a try out wide, and then again as scrum half Jacob Jordan was sent to the sin bin for ten minutes, 26-7, with the hosts a man up.

Yet, despite the Hurricanes facing all of the odds in an uphill battle, they were the ones to strike back next. After getting hold of possession and working their way up the field, thanks to a turnover penalty from stand in captain, Sam Flux, Sandown could attack from the line out and with their driving maul becoming highly effective, the hosts were starting to give away penalties at the breakdown.

Man of the Match Henry Bagnall was at the fore, with his tireless work around the park, as he chopped down defenders and carried well.

Momentum swung back in Hurricane’s favour
As a few phases moved into the middle of the field and deep into the Fordingbridge 22, another penalty came the way of Sandown, as full back Tom Borrer took a quick tap and found himself over the try line to cut the deficit, 26-14, Borrer’s conversion successful.

This ignited the Hurricanes and all of a sudden the momentum had swung back in their favour. With the ball recovered from the kick-off, Sandown set about attacking again, and were soon inside the Fordingbridge half.

Making holes in defence
The returning Ben Harvey to the starting line up and his fellow prop Ben Shannon began to make holes in the home sides defences, and with the offloads now sticking to hand, the Hurricanes attack was stretching the hosts defence.

Following some swift hands down the line, this provided winger Michael Barrett with space to sprint to the try line, doing his best to get as close to the posts as possible. Unfortunately, Borrer’s conversion just went wide, but with the score now at 26-19, momentum was in the favour of the visitors.

Home side rattled
With the feeling the host was a little rattled and perhaps suffering from Deja vu, Sandown had the opportunity to kick to the corner and mount another assault on the Fordingbridge try line. As the first attempt went down, it allowed the Hurricanes another attempt at the line out.

With the maul stopped legally this time around, the home side’s defence holding firm. The ball was spun wide and then with a pass intercepted in midfield, Fordingbridge could immediately relieve the pressure.

They did so by running the ball straight back into the Sandown 22, and with the scramble defence seemingly holding the line, another line break saw the attacker make for the try line. With the attacker seemingly held up, the referee awarded the score, and the collective sigh of relief from the Fordingbridge supporters could be felt. With the conversion going over, this dented the Hurricanes morale and momentum.

Final scores
The clock ticking away, and the game sliding away from the visitors, a late run and break through the Sandown defence from Fordingbridge had defenders grasping at thin air. A late attempt and continued holding on from Alex Loftus, resulted in a penalty try and a yellow card. This score more than sealed the result for the hosts, with barely moments remaining in the fixture – the final score to 39 – 19.

An enthralling game played in the best manner by both sides, stand in captain Sam Flux saluted the effort and heart from his charges as they fought back valiantly, and almost recreated the same result they achieved a few weeks previous. A nod also to Zac Davies and Dave Owen for making their debuts on the day. The only sour note being that the Hurricanes could not manage to take any tangible points home with them.

The Hurricanes will now host Surrey 1 side Old Wimbledonians in the London & SE – Junior Vase, on Saturday 2nd December, at the Fairway.

Old Wimbledonians, currently hold sixth place in Surrey 1, the Hampshire equivalent of Hampshire 1. They will make the trip down to the Fairway following their success in the second round, defeating Sittingbourne from Kent, 76-0.

The Hurricanes should have most of their men available this week. 1st XV Captain Sam Rees is still recovering from an injury picked up in the Hampshire Plate. Dave Owen will not make it after injuring his ankle against Fordingbridge last weekend.

Long term injuries
On the long term injury list we have: Jack Wedderkop, Luke Wedderkop and David Greenough, who are sadly still recovering, and hope they are going well.

Nevertheless, please come and support the Hurricanes this Saturday (2nd December), kick off from 1400 and the clubhouse open from 1300.

Come and be the 16th man and push the Club through into the Fourth Round of the Vase!