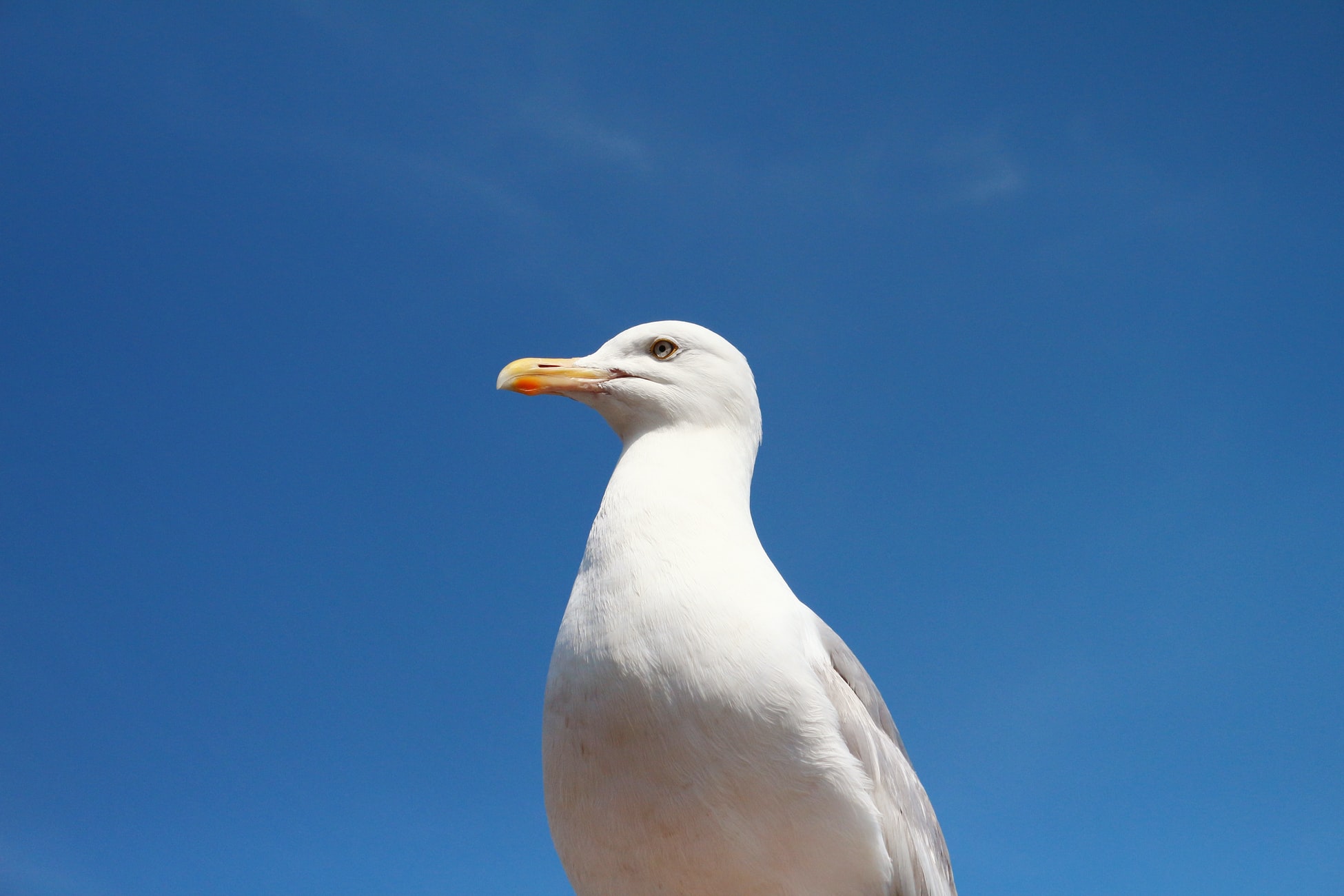 Sue Curd is a member of the Ventnor Telling Tales group of writers, who despite lockdown have continued to meet each week (on Zoom) to share their work. Sue shares her latest piece, set on Ryde seafront. Ed

Mabel is a fine looking gull. Look at her swooping around, marvellous eyesight. She can spot food like no other gull. We make a fine couple.

Usually at 2am on a weekend there’s food galore. All of us gulls would be vying for position, circling above Hong Kong Express like planes at Heathrow waiting for a slot. And later when the punters had gone home, we’d all feast together. Plenty for all. But this weekend it’s eerily quiet. All the pubs are shut, the restaurants, the fast-food outlets.

Another thing we noticed, there were hardly any cars about. We swooped around the Island the next day. Strangely there were long queues of people outside Tesco, all with trolleys. When they came out, their trolleys were stacked with toilet rolls.

Another gull, Billy, landed next to me. He said,

“Flew over to Portsmouth earlier, it’s empty there too. Except for the supermarkets.”

We called a gathering on Ryde beach. Someone noticed the Fastcat wasn’t running and the Hover less often. Someone said the Yarmouth crossing had stopped too.

“I miss the vindaloo the most.”

“I liked chicken noodles myself.”

“Nice bit of fish in batter was my favourite.”

“Okay, call to order everyone. The question is what will we eat?”

“Sleek black rats. They’re taking risks I notice, coming out into the open much more.”

“Has anyone checked the bins, any food there?”

“Nothing” came the reply.

“What else apart from rats?”

“Fat lazy pigeons would be easy to catch.”

“There’s whole loaves of bread being chucked out for pigeons by an old lady in Downside every day. Bait.”

“So we sit on the pitch of the rooves, and wait for the pigeons to start gorging themselves and then swoop down on them. Good idea, I’m up for that.”

A few days passed, and we were living off rats and pigeons, but we craved variety. We noticed a lot more white vans on the road. Crates of food being delivered. There started to be some take-away, but mostly it was delivered door-to-door. Nothing for us.

We organised ourselves. The older ones teaching the younger ones how to hunt, how to work together to trap our prey. We taught them how to fish too. It was fun and it made me a whole lot fitter. I can see a glint in Mabel’s eye, this may not be a bad thing after all.

Filed under: Ryde, Isle of Wight, The Arts, Writers

Lovely quirky text to begin the week. Good to have a gull’s view point on lockdown

Could we have more stories from this writer please

Vote Up70Vote Down
Tamara
There are a number of species of seagull that live on the Island. They belong to a family of birds: Laridae, and vary greatly in size and behaviour. So we should identify which species we are referring to. The bird in the photo is a European herring gull, one of the largest and most feisty species, along with the great black-backed gull. In my opinion, they are… Read more »
Vote Up60Vote Down
Tamara

I should add that the herring gull population of the British Isles is in sharp decline – a 50% drop in 25 years – and that they are on the RSPB’s Red List of endangered species and are fully protected by law.

Seagulls do not eat pigeons.

I just looked this up in Wikipedia and find that ‘in cities, herring gulls have been witnessed attacking and killing feral pigeons’. This statement is vague and unsubstantiated, unless the evidence is in one of the works cited in the footnotes.

It’s a piece of fiction

Yes, but herring gulls aren’t fictional. And the pandemic lockdown was very real too. I think this story is all the better for having credible information like this in it.