With an average speed of 92.87 mph and in the process taking the UKOPRA Offshore 1 World Championship Drew Langdon and Miles Jennings won the 2019 Cowes Torquay Cowes on Sunday. 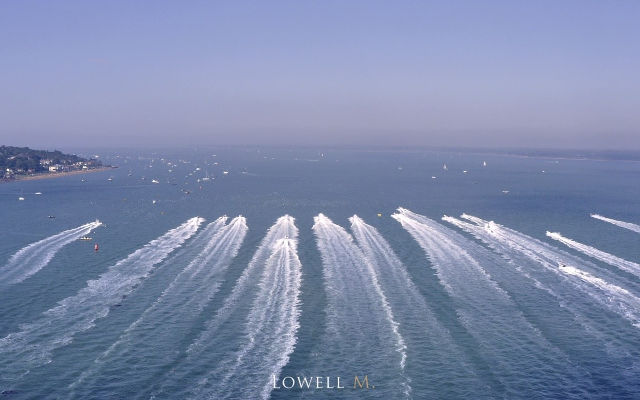 Drew Langdon and Miles Jennings won the 2019 Cowes Torquay Cowes on Sunday with an average speed of 92.87 mph and in the process took the UKOPRA Offshore 1 World Championship.

Their nearest rivals in the Championship, Richard Carlton, Phil and Neil Payter who were racing in a Chevrolet powered Cigarette, had their hopes dashed when they lost oil pressure on one motor on the way back from Teignmouth.

The crew persevered and decided to continue racing at a far reduced speed and crossed the finish line 12 minutes outside the time limit.

For the victors, it was their second successive Cowes win, Langdon who had been on a strictly controlled training routine before the race told me after:

Fog banks
Our main problem was the fog banks at Portland, we were running alongside Tommy One at 110 MPH, when we both had to back right off.

We would have taken the course record but for the bad visibility.

The Italian team of Maurizio Schepici and Giampaolo Montavoci were pushing Silverline hard in their Seatek powered Metamarine hull when they lost power and started to take water.

The boat was subsequently towed into Torquay by the RNLI. It hasn’t been an easy season for Schepici, however, he vowed to be back racing in Britain next year.

The Belgium team of Jean-Piërre Neels, Thomas Vandamme and Marijke D’hondt posted their best every performance at Cowes – 4th.

David Foa and Charles Swales were fifth overall and won the Offshore 2 class, the West Country pairing have won all 3 UKOPRA races this season and wrapped up the UKOPRA Offshore 2 World Championship.

Stuart Cureton and Francis Whitley rounded off the finishers with an average speed of 46.47 MPH over the 179.50 NM course.

In the highly competitive Class 3 A/B, Malcolm Dopson and Andy Hiscox in 66 racing prevailed over Barry Culver and Stuart Unwin in a similar Phantom 19g hull.

Dopson and his accomplished navigator Hiscox averaged 59.93 MPH over the 65.70 NM course.

Multispark Race Product made it an all Phantom 19g podium with Dave Sheldon and Chris Bailey taking third.

66 Racing’s win added to to their success in Guernsey and a third place in Poole gave them the 2019 UKOPRA Championship.

They steered their former Powerboat P1 Panther to front ahead of Mark and Andy Childs’ Cougar.

Glynn Norvall was racing with the youngest competitor in the race, Charlotte Camsey.

The duo who teamed-up after meeting at the Asia Powerboat Championship placed third.

Burdock and Donnelly’s win put enough points on the board to hand them the Championship in 3X.

The overall race winners and Class 3N victors were DB Marine with Brian Peedell and Andy Yeo in control.

Peedell, who was also celebrating his 66th birthday, averaged a blistering 69.58 MPH in his Ocke Mannerfelt designed hull.

A second place for Motorvated Canvey, was good enough for the team to walk away with the 3N Championship.

The ‘Last of the Summer Wine’ crew of Paul Buckner, Kerry Bobin, Jason Briggs and Ricky Hill placed in front of another veteran team that were making their return to racing, Clive and Sue Baker in Shadow Warrior.