Sisters On Their Way To Stardom

Debut EP from Island band Me and My Sister

A fun loving indie band featuring two sisters have released their Debut EP, which features the two of them singing in harmony with each other in a bubbly style. 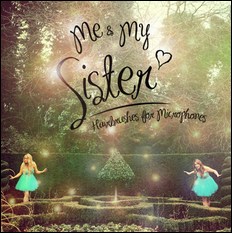 The band which originally consisted of just Becky and Vicki Lutas soon got a name for themselves when they featured on the likes of GMTV with a live performance, and also performing at Bestival 2010.

Since then have become the forefront of Island music, spreading their unique talent in an all-singing, all matching-dresses band style.

Britney, Boys and the Bestival
Their newest album is about their lives together, boys and how one day they want to be pop stars – and with your help they can make this optimistic outlook, a reality.

You can download their album for a small price of £3, which is available in “Any format you could possible desire”.

Alternatively, if you’re someone who’d rather admire the album artwork whilst listening to their tracks, you can purchase their CD by getting in contact with them via the email below.

The CD is accompanied by a free party bag including some fun goodies consisting of a train whistle and a Me and My Sister badge. Get in contact with them: [email protected]

Two piece to four piece
The duet became a fully fledged band in 2010 when they were accompanied by bassist – Ross Mabey and drummer, singer and keyboard player – Luke Steen, and since then have progressed forwards in leaps and bounds.

If you’re interested in their band and would like to find out more what they’re about then you can check out their site which delves a little further into their lives, with a blog running alongside to find out their latest news and updates.

3 Comments on "Sisters On Their Way To Stardom"

Good luck to the sisters – I’m not normally tempted by giveaways but – a train whistle!

They are very funny! Wasn’t expecting that.

Oh dear..
The of forefront of Island music ! I am sorry but I’ve not seen such tallentless musicians/artist/singers in all of my life ,they are awful… No offence to them personally but me and my friends cringed at bestival a cpl of yeas ago I cant believe they are still out there… Ahhhhh!!!!