Solent WASPI brings day of action to the Isle of Wight 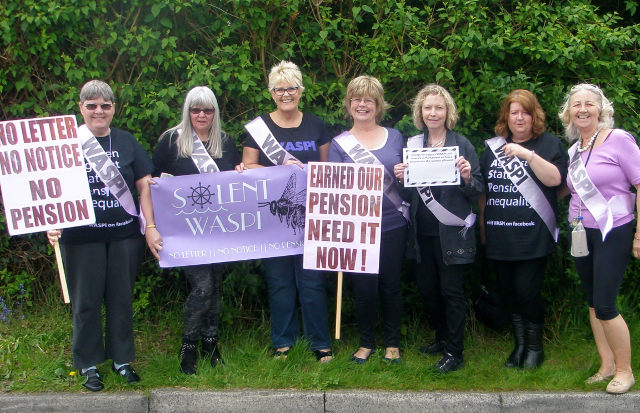 Solent Women Against State Pension Inequality (WASPI) Supporters’ Group is part of a national campaign for fair transitional payments (or compensation) for women born in the 1950s who have had their state pension age increased with little or no notice.

WASPI agrees men and women should receive their state pension at the same age, but objects to the way the policy has been implemented. We do not ask for the state pension age to revert to 60.

We will be handing out flyers and talking to Island residents about the issue. We will also be explaining how women can make complaints of maladministration against the Department for Work and Pensions, which is part of our campaign for fair compensation.

“We’re very much looking forward to meeting Island women, raising awareness and encouraging them to join our campaign. We agree with equality and equalising the pension age for men and women, but the changes to state pension age for women were not communicated properly.

“Consequently, there was no time to make alternative financial or work life plans. Unfortunately, women born in the 1950s often did not have the opportunities to earn high salaries or pay into an occupational pension.

“Many worked part-time to look after children or elderly relatives and now may not have sufficient NI contributions to maximise their state pension.

“Others may have been contracted out so when eventually they do receive their pension it will be considerably less than the £159 often quoted. But this situation doesn’t just impact on women; it hits men too and all members of households who rely on a woman’s state pension as part of their income.”

Where to be
During their day on the Isle of Wight, Solent WASPIs will be at the following locations:

Solent WASPI has thanked the Isle of Wight Council for being the first in the region to approve a motion supporting the campaign and hopes to meet some members on the day.

No response from MP
Isle of Wight Conservative MP, Bob Seely, was asked to meet, but as Shelagh and Carolyne said,

“We are disappointed that Mr Seely hasn’t responded to our request to talk about an issue that affects thousands of his constituents and their families. We’ve also written to him in his capacity as a councillor.

“He is aware of our plans for the day so we hope he will come along to find out more about this very important matter.”

We look forward to meeting many Island women on 8th September.

For more information about WASPI, please check out the national Website, visit the Solent Waspi Supporters Group on Facebook or email us at: [email protected]

Good to see this. I took the Motion supporting this campaign to IW Council last year, where it was overwhelmingly supported, I but have heard no more from the Council’s leadership as to what other support they have offered.

I hope Mr Seely will support this.

The day before he was elected Mr Seely promised me he would.

It must also be hoped that the day after he was elected he didn’t promise to support his government bosses instead. In the CP Jonathan Young draws attention to what has happened to Bob’s ‘number one priority’ pre-election pledge.