The council across the water join others calling on the Government to support the notion of compensation payments for women born in the 1950s. 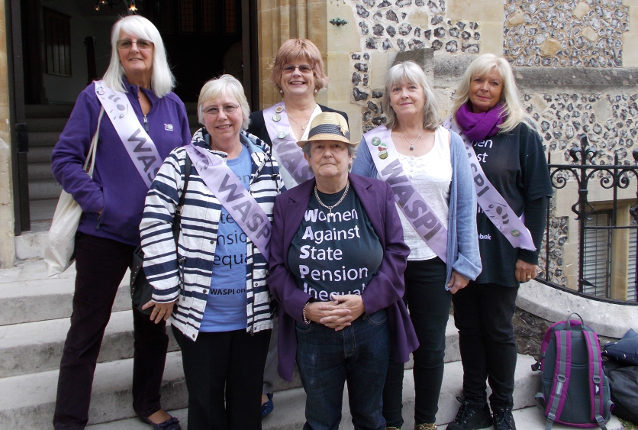 Hampshire County Council (HCC) has signalled its support for campaigners in the Solent region who are fighting for state pension justice for women born in the 1950s.

On 17th May 2019, the Solent branch of WASPI (Women Against State Pension Inequality) made a deputation to the Annual General Meeting of Hampshire County Council explaining more about the situation in which over 116,000 Hampshire women born in the 1950s have been adversely affected by changes to the women’s State Pension Age (SPA).

Motion supported
The deputation – made on behalf of Solent WASPI by member Carolyne Jacobs – was in support of a Notice of Motion proposed by Cllr Malcolm Wade (Dibden and Hythe) calling on the Government to support the notion of compensation payments for women born in the 1950s.

It was seconded by Cllr David Harrison (Totton South and Marchwood). HCC members unanimously agreed to call on the Government to consider making transitional payments to the women affected.

What is WASPI?
WASPI is a national campaign for 1950s born women who have been adversely affected by the Pension Acts of 1995 and 2011.

WASPI supports an equal SPA for men and women, but objects to the way the changes have been implemented with little, or no, notice.

In 1995 the Government increased the state pension age for women from 60 to 65; the changes were to be implemented by 2020 and would result in the same SPA for men and women. But the Government did not write directly to any of the women affected until 2009 – 14 years after the Act – and many did not find out until after 2011 when the SPA was increased again to 66 for men and women.

Loss of up to £45,000
This meant that some women were approaching 60 before they realised that they would receive their state pension far later than expected.

The rise in women’s SPA has been far too rapid, leaving 1950s women little or no time to make alternative financial or workplace arrangements. It has caused distress and hardship for those who have no occupational pension and are totally reliant on their state pension for their retirement income.

Hardship of women affected
There are women in the Solent region who have had to sell their homes to survive or have had to seek out a new job in their 60s.

Unfortunately, the changes do not only affect women born in the 1950s, but also their partners; parents, for whom they may need to provide care; or grandchildren, who they are often asked to look after while their parents are at work.

HCC now joins 160 other local authorities, including Portsmouth, Southampton and the Isle of Wight, in writing to the Government asking it to consider transitional payments for all 1950s born women.

Solent WASPI thanks Cllrs Wade and Harrison, and all members of Hampshire County Council, for acknowledging this injustice and asking the Government to put it right.