Southampton’s Royal Pier development – which was due to sit on the current site of the Red Funnel ferry terminal – has been scrapped. Details within. 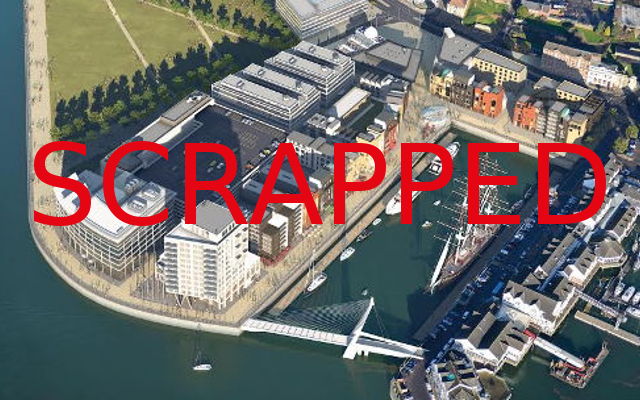 A multi-million pound scheme to transform Southampton waterfront has been scrapped.

A hotel, a casino, 730 homes and a gourmet market were set to be built at the site of the derelict Royal Pier, but the future of the site is now hanging in the balance as Southampton City Council (SCC) has ended an agreement signed in 2014 with developer RPW Southampton Ltd.

The reasons behind the move have not been confirmed.

The city council said it remains committed to the redevelopment of the Royal Pier and  welcomes “all expressions of interest from potential investors”.

But Southampton Itchen MP Royston Smith said the authority could have done a lot more to support the developer.

“They [the council] absolutely should reassure local residents and businesses and take action. It is unfortunate and disapponting that we are back to square one. The council and its partners should quickly bring forward a new scheme that will create the world-class waterfont that we want.

“I would hope that the council has done everything they could to insure the scheme was going to be delivered.”

Smith: Disappointed but not surprised
But Mr Smith said the council should have supported  RPW more.

“I’m disappointed but not surprised. We have run out of time and there will not be a development in the short term. The council have to decide what they want for the site. This is five years gone and now it’s going to take them some more time before anything is done. They should have helped the company find funders and supporters to help them get the scheme off the ground.”

SCC did not  confirm the causes behind the decision to end the deal.

“Unfortunately, none of these came to fruition, so we terminated the agreement. The Council remains committed to Royal Pier and welcomes all expressions of interest from potential investors who want to work on a world-class waterfront destination.”

The city council said the authority will continue to work with neighbouring waterfront landowners, Associated British Ports and The Crown Estate, as well as the occupiers, to explore the potential for deliverable development plans.

It is understood KMG Capital Markets owns RPW. None of them could be reached for a comment.