The new loos in Post Office Lane, Newport will cost you 40p to use, but they are a massive improvement on what was there before and should last 40-50 years 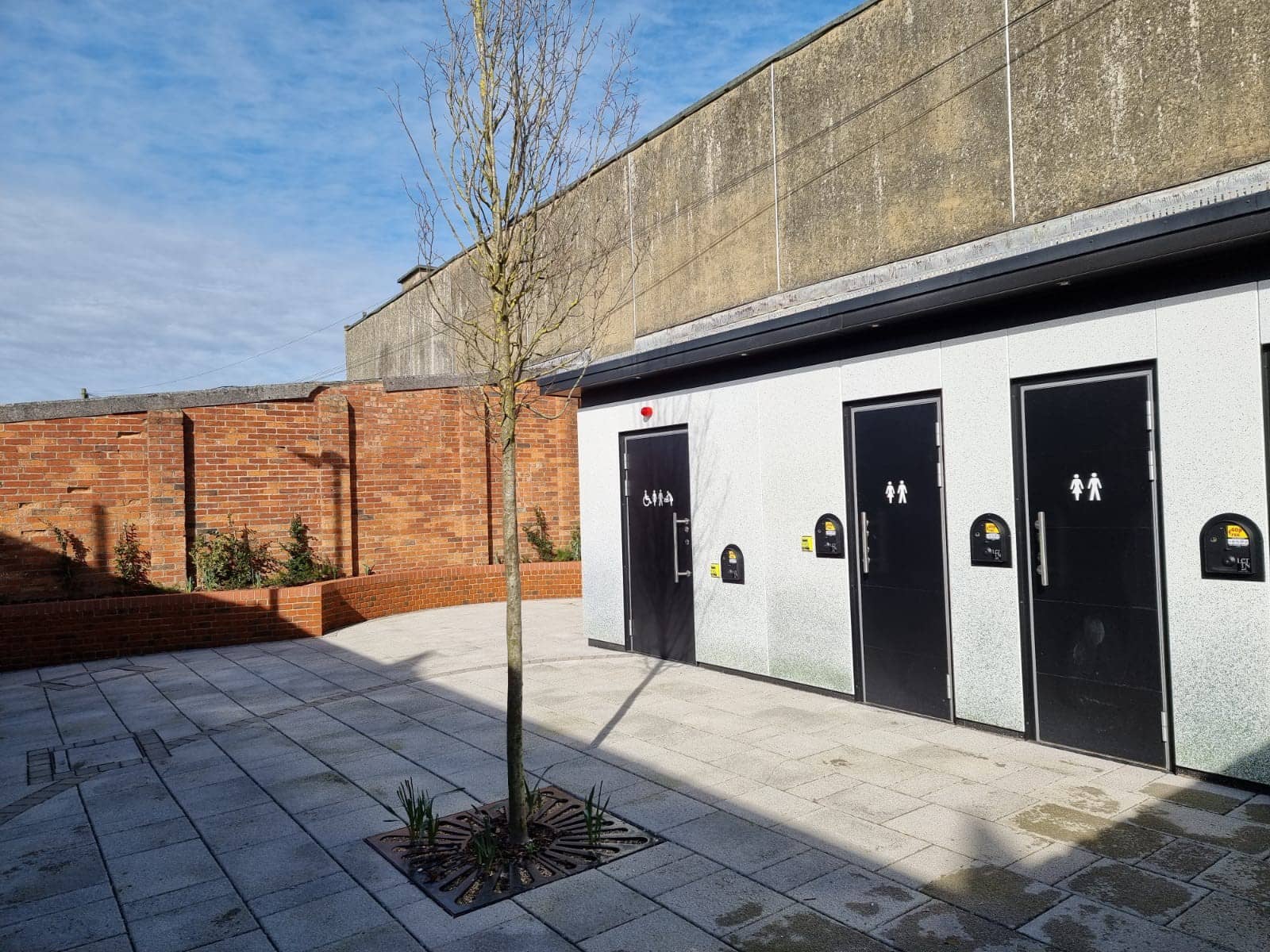 In 2016 the Council took over all the public toilets in Newport and Carisbrooke when the IW Council ceased to run them.

New building rather than refurbish
Post Office Lane was quickly identified as being the toilets in most need of upgrading, given the general condition and having the highest footfall of all the locations. Rather than refurbish, a new building was deemed to be more appropriate to provide clean and modern facilities.

Danfo specialise in public toilet provision, installing prefabricated buildings, containing individual cubicles, which are easy to clean, robust, energy and water efficient.  Users will pay 40 pence, which can be by coins or contactless payment.

Running costs are also reduced due to energy, consumables, maintenance and water savings.

Green roof and enamelled walls
A more attractive public space has been created with new landscaping, planting and the building has a “Green” roof planted with sedum to create an area to encourage wildlife, fitting in perfectly with Newport being the capital of the Isle of Wight Biosphere Reserve. The building has also been clad with enamelled sheets which gives a light, bright, long lasting and easy to maintain finish.

Tricky site
The site threw up some challenges due to its location down a narrow lane and an archaeological inspection was required before the new foundations could be laid.

Most challenging was craning in the large, prefabricated building and thanks go to Prezzo for the use of their car park.  A crane had to be brought over from the mainland due to the size needed.

Tribute to project manager
Special thanks go to the Danfo project manager Claudio Catino who ensured delivery of this installation and very sadly passed away in January from Covid-19.

Jones-Evans: These new toilets are something to be proud of
Cllr Julie Jones-Evans, Chair of Newport and Carisbrooke Community Council and member for Newport Central said

“When we took over the public toilets in Newport and Carisbrooke it was immediately clear that the condition of the Post Office Lane facilities meant they would need replacing, with modern and fit for purpose toilets.

“It’s taken a while and a significant investment but the result is such a marked change, with the clean toilets, new public space, planting and attractive enamel cladding from AJ Wells. Instead of being an embarrassment these new toilets are something to be proud of and more in keeping with our status as the County Town.”

“It is really good to finally see this project completed to give residents of Newport and Carisbrooke the quality facilities and landscape they deserve.”

“This new facility is great news for Newport, bringing another Island location into the 21st Century.

“Danfo have now delivered Shanklin, Gurnard and Yarmouth with other locations on the cards to start very soon, offering sustainable, accessible and eco-friendly custom toilet options that seem a world apart from the old smelly and somewhat problematic facilities we seem to have been left with.

“I’m extremely pleased along with Danfo UK to be able to assist and support Community, Town and Parish Councils with these changes and options moving forward.”

News shared by Lucy on behalf of Newport and Carisbrooke Community, in her own words, Ed

Well the last ones have been there since 1987/88 so they haven’t done bad, they came from Bradford area and the same method of the Crane in the old Post Office car park was used. Not sure about 40p a go though and they will have to be pretty good to last 40 to 50 years, perhaps regular maintenance is required.

Yes, of course we want clean facilities, but any charge (especially 40p) is an affront to the tax-paying public. Access to free, clean toilet facilities should be a basic right.
I hope there are not more of these chargeable toilets popping up, especially on our beaches where a charge would mean people using nature to relieve themselves.

Vote Up14-2Vote Down
Colin
Having some decent toilets in Newport is long overdue because the Isle of Wight council failed miserably to provide any. The Community Council are to be congratulated for doing what the IWC should be doing. Unfortunately charging 40p may put some people off but if they are kept clean and properly maintained on a REGULAR basis then I expect people will use them. I hope there are… Read more »
Vote Up70Vote Down
Angela Hewitt

The one thing I hate about public loos is that they are never cleaned PROPERLY. I can’t stand the layers of grime around fixtures and fittings

Bit OOT 40p that is a massive rise from 0. I just hope they have enough people visit Newport as it is resembling a ghost town more and more with a good proportion of the shops closed. I used to spend hours looking round now it is so depressing I get in and out as quick as possible.

Actually that equates to eight shillings – so 96 pennies in proper money…!!

40p is a real bargain if it includes the spanking.