Warriors co-promoter Barry Bishop says the team will need to raise their game for the next team meeting which is also against Plymouth at their track in ten days time. 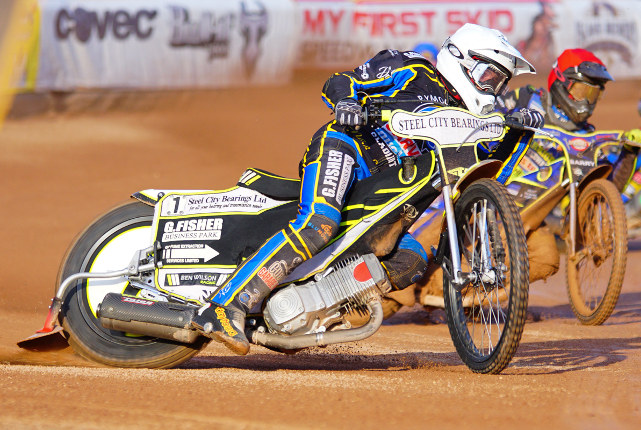 Isle of Wight 42 Plymouth 48
For the second time in just over a month the Isle of Wight Wightlink Warriors speedway team fell victim to another smash and grab raid by the Plymouth Gladiators who took the spoils in this National League encounter to add to their already enviable record of winning results on the Island.

With the visitors tracking four influential former Warriors, the home side never established control of the meeting and noticeably were unable to stop the Gladiators number one Ben Wilson (yes, a former Warrior) scorching to a full five ride maximum.

Even a fifteen metre handicap for a tapes infringement couldn’t stop Wilson sweeping through the field to record a victory and his determination certainly rubbed off on his team mates who produced a solid team display.

Lacked spark
Unfortunately the Warriors seemed to lack any spark and their management will be looking back on this showing and highlighting at least three instances where points were carelessly lost – and in a tight contest may well have made the difference.

After the meeting, Warriors co-promoter Barry Bishop reflected the all-round frustration as he said,

“I’m really disappointed. I thought it would be a close meeting and I thought we would have enough fire power to see us home, however Ben Wilson produced a stunning maximum for them and his rides in heats 13 and 15 when the chips were down blew our hopes away.

“We will need to raise our game for our next team meeting which is also against them at their track in ten days time”.