The co-promoter, Barry Bishop said he was “delighted with the way our boys went about their business and a twelve point win really exceeded my expectations”. 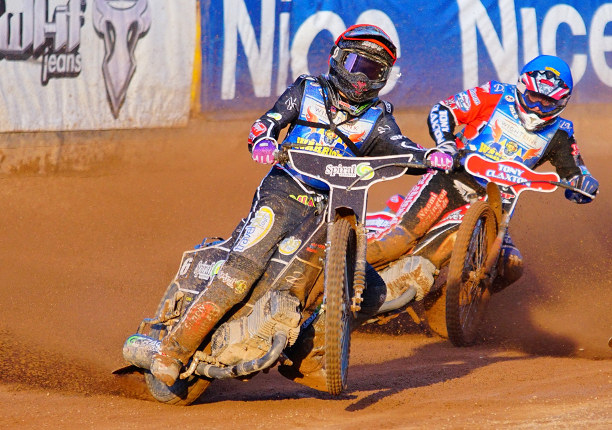 Isle of Wight Warriors 51 Belle Vue Colts 39
The Isle of Wight ‘Wightlink’ Warriors delivered a comprehensive team performance as they shook off a persistent Colts side before securing all three league points.

Both sides were forced into late changes with Warriors Georgie Wood worryingly suffering a recurrence of the neck and back problems that have plagued him for the past fortnight. On this occasion the home side had put Danyon Hume on standby as cover and the Leicester man proved an inspired choice. Colts were badly hampered by the unexpected absence of Danny Phillips whose van broke down on the mainland on the way to the Island and the visitors had to contest the meeting with no rider in the number four position as efforts to secure a replacement at the eleventh hour proved fruitless.

Impressive tapes to flag victory
In front of another appreciative holiday crowd, Hume signalled his intentions as early as heat one with an impressive tapes to flag victory, one of four wins from his five rides. He received superb back up from home skipper Ben Morley who rode unbeaten by an opponent all night and it was Hume and Morley (pictured) who produced 5-1 wins in heats 13 and 15 to scupper the Colts faint hopes of returning north with a consolation league point.

Also on the Warriors side, Scott Campos had a very productive night making crucial passes as well as a splendid defensive ride to hold the Colts Island specialist Leon Flint at bay, whilst Chris Widman, Connor King and Chad Wirtzfeld all contributed crucial points at vital times. Warriors also welcomed back Danno Verge following his concussion suspension and he grew into the meeting despite an unfortunate fall in heat nine.

“Another great night for the Warriors against a Colts side who didn’t fully fire. Whether to absence of Danny Phillips affected them I don’t know, but I was delighted with the way our boys went about their business and a twelve point win really exceeded my expectations.

“I thought Ben (Morley) was magnificent again and Danyon (Hume) was the perfect replacement for Georgie. We desperately want to have a crack at the play-offs and the riders have just told me that they will do everything they can over the last three meetings.”

The scheduled Midland and Southern Development League match between the Wizards and Birmingham Bulls was postponed with the visitors unable to field a side because of injury and availability issues.

The meeting will be re-staged once a suitable date is agreed.