It would be fantastic to have as many people as possible on the Ryde shoreside to cheers these brave swimmers as they embark on the swim to Southsea. Be there just before 1pm on 21st July. 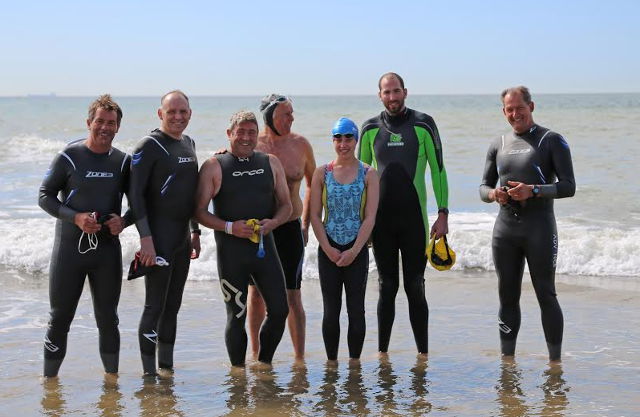 Thanks to Judi for sharing news of this awareness and fundraising event for the Motor Neurone Disease Association. Ed

On Monday 21 July, 22 swimmers will be stepping into the Solent and preparing to cross from the Isle of Wight to Portsmouth raising much needed funds for Motor Neurone Disease Association (MNDA).

Last year it was just four who swam the stretch of water. Tony Bray, Scott Miles, Zippy Davies and Dave Pearce swam from Ryde to Portsmouth to raise funds and awareness for disease.

Bumper number of swimmers
In its second year the original four are overwhelmed with the response of people who have come forward to train for this year’s challenging event.

The Queens Harbour Master says about the crossing,

“Swimming across the Solent is not just another open water swim and should not be undertaken without considerable preparation.

“Whilst not as difficult as swimming across the English Channel, the cross-Solent swimmer has to cross at least one busy shipping lane, negotiate around ferries and hovercraft travelling to and from the Isle of Wight and avoid all the many pleasure boats using the Solent.

“The currents produced by the tides are strong and complex and cannot be ignored.” Ian has MND which is a progressive disease that attacks the motor neurones, or nerves, in the brain and spinal cord. This means messages gradually stop reaching muscles, which leads to weakness and wasting.

MND can affect how you walk, talk, eat, drink and breathe. There is currently no cure for this terminal disease. MNDA is a national charity which funds and promotes global research into the disease and provides support for people affected by MND in the UK.

Ian Pratt says about the swim,

“It is people like Tony who have the dedication, commitment and ability to raise awareness in the wider community. It is through his determination that more and more people know about this disease. I am very fortunate to be able to call Tony one of my closest friends when he called me to ask whether he could make the Swim an annual event, and name it after me, I was so honoured.”

Tony Bray is Chair of the Isle of Wight Group of MNDA and also a local radio broadcaster. Tony explains about the event:

“Each swimmer is accompanied whilst in the water by a kayak and there are also safety boats with crews of two on board for safety. We will enter the sea at Ryde at approximately 1pm and hope to complete the swim by 3.30pm on Monday 21 July.

“The Portsmouth and South East Hampshire Group will be there to greet the swimmers on Southsea beach and raise more awareness and funds on the day for the charity.

“If readers want to donate now please visit our JustGiving Page. We have raised over £17,000 to date. We look forward to a big crowd being on both sides of the water to greet us on the big day.”

Swimming the Solent by Graham Pountney has been selected to be shown at the Isle of Wight Film Festival this year. The documentary was made about last years swim and highlights the amazing efforts of the swimmers to raise awareness of the charity. The film is showing on Saturday 16th and details can be found on the Isle of Wight Film Festival website.

I am the author of the fantasy novels, The Elfin Child and The Elfin Child II and also a poetry book called Penglewissle Poetry. I have Motor Neurone Disease and donate all profits from my books to the Isle of Wight MND Association.

Hi , I would really like to swim the Solent for Motor Neuroma next year-who can I contact please? Thanks Chris