When you compare the profits from previous years to the losses of the last four, it makes for sorry reading. OnTheWight has the detail 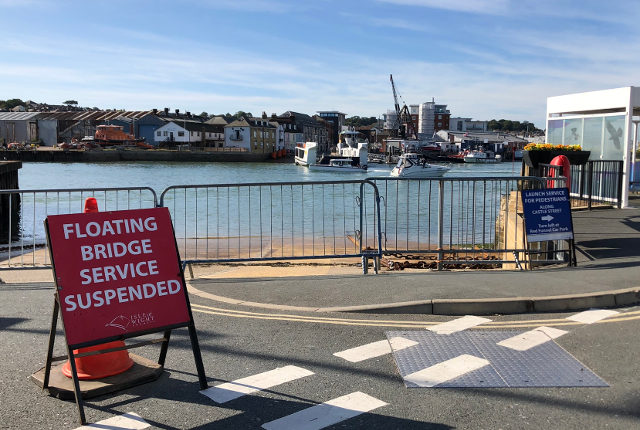 Back in 2015/16, when the ‘new, more efficient’ £3.2m floating bridge was just an apple in the council’s eye, its predecessor, Floating Bridge 5, was busy helping residents and businesses cross the Medina River and making a profit whilst doing so.

Profit that went back into the council’s coffers to help pay for others services on the Isle of Wight.

Fast forward a couple of years and the ‘new, more efficient’ bridge was no longer making a profit, but also racking up massive losses, and two years on, still is.

When you compare the profits from previous years to the losses of the last four, it makes for sorry reading.

Costs due to failures
Since November 2018, when there are certain tides that the ‘new, more efficient’ bridge can’t cope with due to its design and issues with the chain depth, it requires the help of a pushboat, MV Seaclear.

The ongoing cost of using this vessel is now almost £150,000, whilst the cost of using the passenger launch when the ‘new, more efficient’ bridge is out of service has so far cost over £180,000.

Council says no
When asked for the approximate loss of revenue when the bridge is out of service, the council replied that they are not obliged to create new information for the purposes of an FOI request and refused to provide the figure.

The figures above do not include the cost of replacing both prows, which took the bridge out of service for three weeks last month.

6 Comments on "The £3.2m Floating Bridge racks up staggering losses: See the detail"

newest oldest most voted
Benny C
Get this in the press and get those responsible in the public eye. They need to be removed from office. They are damaging the island reputation, squandering our money, they don’t have the skills to run the Council teams trying to sort all this out and they don’t seem too bothered about accountability. Some aren’t even clear on what their accountability is. Island Roads contract management not… Read more »
Vote Up1060Vote Down
davimel
Just waiting for the “Yes we made a loss, but not as much as last year so things are actually better than they were” comments from those desperate to keep their ‘nice little earner’ salary and bonus…SORRY expences. Will reality EVER show its head in County Hall, or are we ALL doomed to rhetoric, lies, waffle and general covering each others backs in the name of politics… Read more »
Vote Up660Vote Down
Benny C

Dinosaur Dave Stewart is far too weak and inadequate a leader to take action like that. Vote him out, Niton and Whitwell. It’s in your hands, you can help. Sandown should do the same for the member responsible for infrastructure, who recently didn’t even have basic contract performance stats to hand in a formal review. Damaging, disrespectful and disgraceful.

Vote Up60Vote Down
peterj
“the council replied that they are not obliged to create new information for the purposes of an FOI request and refused to provide the figure” Sounds like piffle to me: many successful FOI requests involve summaries or aggregates of existing data, is that really *new* information? Even if what they said was true, you merely need to request the necessary existing data required in order to make… Read more »
Vote Up70Vote Down
jessofwight
We were in Dartmouth on holiday last week. Assuming journey across the Dart is similar distance, and adding Sandbanks (which has woes of its own) for a comparator. Single car journey Cowes – £2.60 Dartmouth Higher Ferry (privately run) – £6.70 Dartmouth Lower Ferry (Local authority)- £6.00 Sandbanks (private) – £4.50 And passenger return: Cowes – £1.50 Dartmouth Higher Ferry – £1.40 Dartmouth Lower Ferry – £3.00… Read more »
Vote Up6-7Vote Down
johnr
Hi Jessofwight, I think you will find that the Dartmouth Lower Ferry is quite a bit further in distance than our Cowes one and the Upper one is considerably more, also remembering that it is approx 25 to 30 miles to drive round, so yes it is expensive in comparison but it not only saves an awful lot of time and expense driving round it is also… Read more »
Vote Up90Vote Down