The Bestival Ryde Slide Is Back!

Dust down your lilos, get your fancy dress thinking caps on, but most of all, make sure you clear the diary for 17th July because the Bestival Ryde Slide will be back in town. 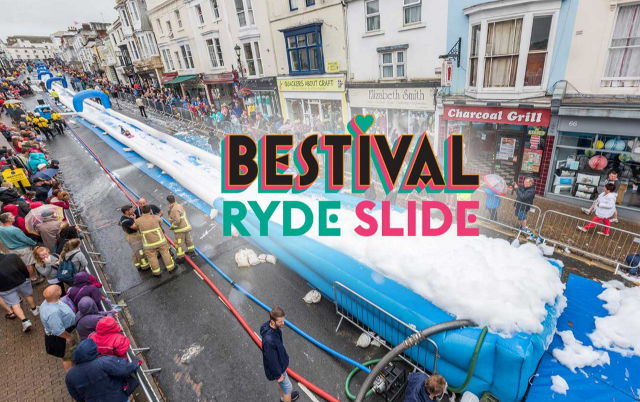 Aidan from Bestival HQ shares this news about the 2016 Ryde Slide! Ed

The Bestival Ryde Slide is back on Union Street this coming 17th July! Featuring a brand new design, this year the slide will be faster than ever, so grab your lilo and get ready for the thrill of your life.

“Yes folks, we’re back! Sliding down the street on a crazy inflatable has never been so much fun, so we had to do it again. And this time, with added fancy dress and a little bit of tinkering, it’s going to be even better. So please enter the draw, donate to a load of good causes and let’s get sliding.”

“It’s happening again in Union Street, Ryde, thanks to Bestival and our supporting friends HSS, Island Roads & Isle of Wight Council who make this event possible. We will once again be handing the profits to our Ryde Big 5 Community Groups & Charities who will also be helping out on Bestival Ryde Slide day.

“It’s still the wackiest way to fundraise and I have it on good authority that the more money you donate the better our chances for a sunny Sunday on 17th July.”

Supporting four local charities
With 600 places up for grabs, hopefuls who want to be in with a chance of skimming down the slide at top speed are asked to make a donation of £5 to be entered into our prize draw.

From futuristic frogmen and novel Neptunians to space age seadogs and ladies of the lake, let your imaginations run wild and you could win prizes including tickets to this year’s Future-themed Bestival and Bestival Ryde Slide t-shirts.

And to top it all off, there will be a Bestival Soundsystem with DJs including Rob da Bank to keep the party atmosphere going all day long!

For a chance to be one of the lucky water sliders, Islanders will be asked to donate a minimum of £5 to local charities. Once you have donated you will be automatically registered in the prize draw – winners to be announced at the end of June.