These five musicians brought out every beautiful nuance of the music led by the masterful playing of the clarinet, which was a privilege to hear on a rainy night 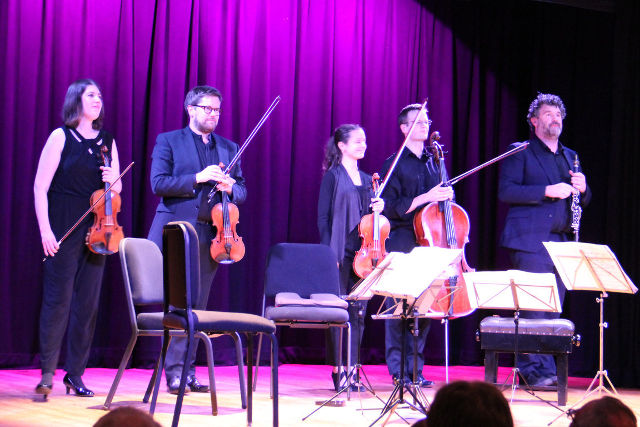 It is commonly held that the best string quartets are four soloists who happen to prefer playing together.

The Castalian Quartet, who performed at last Saturday’s West Wight Arts Concert, fit this description admirably and showed how they communicate perfectly and equally with each other through their music.  They are a young group formed in 2011, since when they have won many prizes.

A true, mature quartet
Their first piece was Schumann’s String Quartet No.2 in F major.  They have excellent interpretative skills with a lovely tone, whether in fast-paced or lyrical passages and they passed the melody between the instruments with delicacy and generosity never for an instant trying to take control over their partners.

This was a true, mature quartet playing.

Exceptional musicianship from leading clarinetist
They were then joined by Matthew Hunt, one of this country’s leading clarinetists to play Penderecki’s Quartet for Clarinet and String Trio.  Another excellent choice at these concerts of works that are probably not that well known to all of us.

Matthew introduced it and joked that we would probably see the fear in their eyes as they approached the second movement!  This piece, written in 1993, is intricate but accessible to the listener and at once showed the exceptional musicianship and total control of his clarinet that Matthew has.

From haunting to ethereal to fast paced
Matthew’s instrument is vocal and captivates whether at low, mellow passages or in higher, insistent interventions whilst the string trio weave the themes between them.

They ranged in this piece from haunting to ethereal to fast paced and the total was a new found joy to many in the audience.

Written with “an open heart and great emotional depth”
The Quartet’s final piece was Brahms Clarinet Quintet in B minor.  Clara Schumann said of this piece “what interesting music – deep and full of meaning”.  She was quite right.

Matthew said his belief was that Brahms writing this at retirement felt liberated from any of his former composing restraints and it sounded as if he wrote with an open heart and great emotional depth.

A privilege to hear
These five musicians brought out every beautiful nuance of the music led by the masterful playing of the clarinet, which was a privilege to hear on a rainy night in Freshwater.