Well done to all the young people who took party in the ‘Great Telling Off’ at the 2018 Isle of Wight Literary Festival, especially the champions as voted for by the audiences. 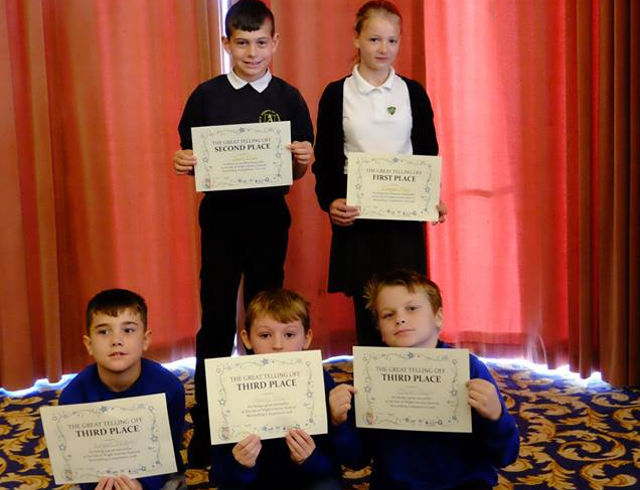 Imogen Mayhew from Arreton Primary School, and Daisy Chapman and Maxine Harfield from The Bay CE School are the 2018 Isle of Wight Literary Festival storytelling champions, as voted by the audiences of two storytelling finales called the ‘Great Telling Off’.

This Palmerston ‘folly’ played a significant role in the defence of the Portsmouth and Southampton during the second world war.

National Trust volunteers, Melvin Hurst, Tim Wander and Bert showed the students around the fort explaining its history and role in Napoleonic times as well as in both World Wars.

Atmospheric and haunting storytelling
The winning story by Daisy and Maxine (pictured below) took the audience back in time as a ghost boy invited the audience to relive the horrors of the first word war.

“The telling of their tale by the two students, was atmospheric and haunting, with clever interweaving of their voices to relate different parts of the tale.” Second and third place went to two students from The Island Free School. Sam Smith’s story ‘The sad truth’ explored the inevitability of war across the ages, whilst third place Jack Perry’s story ‘Revenge’ told of finding an amulet as a link with the past.

Taxi taxi treasures
The primary schools enjoyed a visit from Owen Cambridge from the Time Taxi who brought three archaeological finds to inspire the children. These were an eighteenth century naval officer’s sword found on Ryde beach; a bronze age blade found in a fisherman’s net a few miles off the south of the Island; and a stone age mace head dredged up in Southampton docks.

“Imogen had created a story called ‘The Girl who went through time’ in which she had to use all three of the artefacts to find her way back to the present day. The assured delivery and confidence with which Imogen told her story was very impressive.”

Second place, Jack Bal, of Arreton Primary created a story ‘The curse of the cutlass’ in which the cutlass could petrify anybody who might touch it. Third place was taken by a trio of boys, Logan Docksey, Harry Price and Oliver Sayers from Hunnyhill School, with their humorous tale ‘Kong and the brick wall’

“It has been rewarding working with the students in all the schools.

“The imagination and diversity of the stories they created, and the way they polished and refined their telling of them was great to see. Hopefully, they will all have gained some transferable skills to use when they need to stand up in front of an audience and make their voices heard.”