There’s Something On The Wing: Some ‘Thing’

You know that we’re always trying to bring you diverse forms of writing on an wide range of subjects.

Richard Cattle is an acknowledged expert on all matters ‘un-normal,’ with his work featuring in many renowned publications, including the bible that is the Fortean Times.
If you …

You know that we’re always trying to bring you diverse forms of writing on an wide range of subjects.

Richard Cattle is an acknowledged expert on all matters ‘un-normal,’ with his work featuring in many renowned publications, including the bible that is the Fortean Times.

If you have something that you’d like to put forward for publication, drop us a line to ventnorblog(at)gmail(dot)com 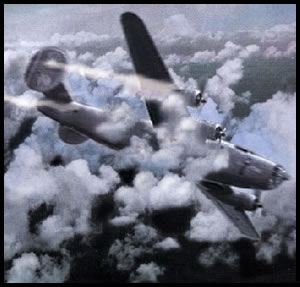 You know when something sounds unbelievable, but you know the person well and believe they’re telling the truth? Well this one’s a little strange to say the least, but the man involved is very reliable.

The witness in this case is a most credible ex-RAF pilot, Mr W Davis of Cowes, Isle of Wight who had a real close encounter whilst flying solo on a training mission over Gimmli in Canada 10th September 1943.

In fact it is so strange, that all I can do is just let you hear his story and make up your own minds. There was a lot of written evidence to back up this case, so it’s a shame it wasn’t reported earlier.

Mr Davis takes up the story:

It was night flight self-navigation 2c two and three quarter hours, this was my last night flight before passing, it was a fair old flight at approx. 130 mph.

Right I’m going to stress now that I wasn’t under any pressure because it was a night flight and nothing was bothering me at the time what so ever. We were easily failed if we were found to have stress problems etc. and on this flight even though I was alone this I was not unusual and I felt confident. The training just takes over, you see and you feel relaxed. So nothing to stress me out or anything like that. Also I was a good navigator and was going to qualify as one after the training as well as a pilot, so I felt accomplished, absolutely nothing to worry about, I knew I had passed – this was just the last flight, not really necessary but you had to do it.

Now, I was based at Gimmli on the shores of Lake Winnipeg and this particular flight took me to Brandon and back again, somewhere between Brandon and Lake Minotober on the last leg home was where the incident happened. I had checked my track and there it was, I was spot on so all I had to do was relax, sit back and wait for the light of the control tower to pop up over the horizon.

It was a beautiful night, clear moon and the visibility was great, there was a little snow on the ground, which helps in navigation because you can see without the confusion of detail. So everything was perfect and all I had to do was wait. At times like this we were trained to scan the horizon all the time to make checks and observe, then you would pan across the control panels to make constant checks on the instruments. You were so used to seeing the instruments, that if one was out, your eyes would snap right on to it – all part of the training.

Well, as I did one of these scans my eyes suddenly did snap onto something but not the instruments this was at the nose of the plane. Just on either side of the nose were two little lumps, well I scratched my head and thought I’ve never seen them before on an Anson, so I had a good look and if anything I thought they looked like engine ports, but the nose on an Anson is empty!

As a pilot you have to know everything about your plane, so I thought I’d better take notes, as you do and investigate when I got back down on the ground. So I dismissed it and carried on with my scans of the horizon back and forth, suddenly my eyes caught some movement and they flashed back onto the nose again. These lumps were moving! I could clearly see they were hands! Then to my shock what I can only describe as an Elf or Pixie-type creature climbed up and onto the nose of the plane.

He, as it was male was about eighteen inches high and was wearing a leather pointed hat blue Grey in colour with stereotypical clothes like you would find on a picture of pixies from about a hundred years ago, if that makes any sense to you.

So, there he was standing on the end. Well the first thing I thought was “Christ” I’m going a hundred and thirty miles an hour and he or his clothes don’t seem to be affected by the slipstream and I couldn’t feel any effect on the wheel or anything. So I thought, it must be a reflection or something but it became obvious to me that it wasn’t because he was reflecting light himself, from both the green port light and the red starboard light he was also reflecting the moonlight. Well there wasn’t anything in the the book in dealing with this sort of thing so I thought I should just observe this thing that was standing just inches away from me on the other side of the cockpit glass.

The Elf Pixie or Leprechaun type creature was about 18 inches high and was European in appearance with a well-trimmed but full beard. Well at this point I thought I’d shut my eyes and open again and yes he’s still there alright so I pinched myself and no, I’m not dreaming either.

He couldn’t have been more than 12 inches away so I got up close to the windscreen. I was fascinated and he was so real that I could see the moonlight shining off his skin between the hairs in his high beard, that’s how close I was. His skin colour was hard to tell because the moon was so bright that night so he looked kind of green-grey, but I’m not happy with that description because of the contamination of the moonlight and the wing lights reflecting of him.

Then he seemed to be walking about a bit as if on some kind of inspection, then he suddenly stopped, as if something caught his eye over my left shoulder but way out somewhere, he just stood there and was looking at it intently. I was naturally drawn to look in the same direction but I couldn’t see anything unusual so I went back to studying him again, this time I moved my head back and forth to make sure I couldn’t see the stars through him and no I couldn’t so he was solid in that respect.

This whole experience lasted just over a minute but it was a very long minute in my life, and then he seemed satisfied with what he had done, you could see the look on his face, he did one last sort of sweep of the aircraft and just sat down on the nose! Now there’s a propeller on each wing yet this little leprechaun or pixie just placed his hands either side of him and just jumped straight down off the nose and out of sight!

When I got back to base I didn’t tell anyone at first because I would have been laughed at by some of the other pilots and probably considered insane or something, but after a few drinks I told a few I could trust.

The thing is the next day in the barrack an older senior instructor came down to my barrack branch to see me, he said “are you the airman that saw that little man last?” I said “Yes Sir”. He said “Well look, you’re not going mad, don’t let it worry son. You’re not seeing things and you’re not not alone either, several of us have seen them.”

I couldn’t question him because he’s a senior officer but I presumed he meant here in Canada.

Well, like I said before, some things really do seem unbelievable, but I can tell you that Mr Davis has all the credentials, no history of mental illness and the detail in his story is incredible and never changes. He has all the qualifications and has kept it quiet for so long, because it just seemed too strange to tell anyone except close relatives. He has an open mind and has always been interested in the cutting edge of science and believes that his experience will one day be explained.

In conclusion, I suppose it’s worth mentioning that Mr Davis knows that what he saw was there and that light was reflected off the pixie or leprechaun as I like to call him, but that the elements seemed to have no effect it.

You see small Irish men climbing on the nose of moving aircraft without the proper safety equipment, not only posses a serious heath and safety hazard, but the aerodynamics of the plane would be altered, but at no point did Mr Davis feel anything unusual with the plane’s handling.

Also, the creature seemed to perform a task, which, once completed, he then disappeared. Pilots the world over, as you will know, have been buzzed occasionally by all manner of strange craft that seem to perform a useless task, then vanish mysteriously. Maybe Mr Davis’s little man was the same phenomena as the glowing lights mini discs and cigar-shaped craft that seem to observe the aircraft of later dates. Perhaps for instance, and this is a big jump, that some things are observing our crafts from time too time, but to keep their identity secret, they use the form somehow of whatever social beliefs of the time exist. For example the pixies and elves of the past could be the bog-eyed grey skinned little men of today.

Or this whole thing could be some kind of super advance psychological experiment, but really I’m stumped on this one, your guess is as good as mine, but I do believe that Mr Davis is telling the truth about what he saw. Perhaps what we see can sometimes be all that one wants us to see.

1 Comment on "There’s Something On The Wing: Some ‘Thing’"