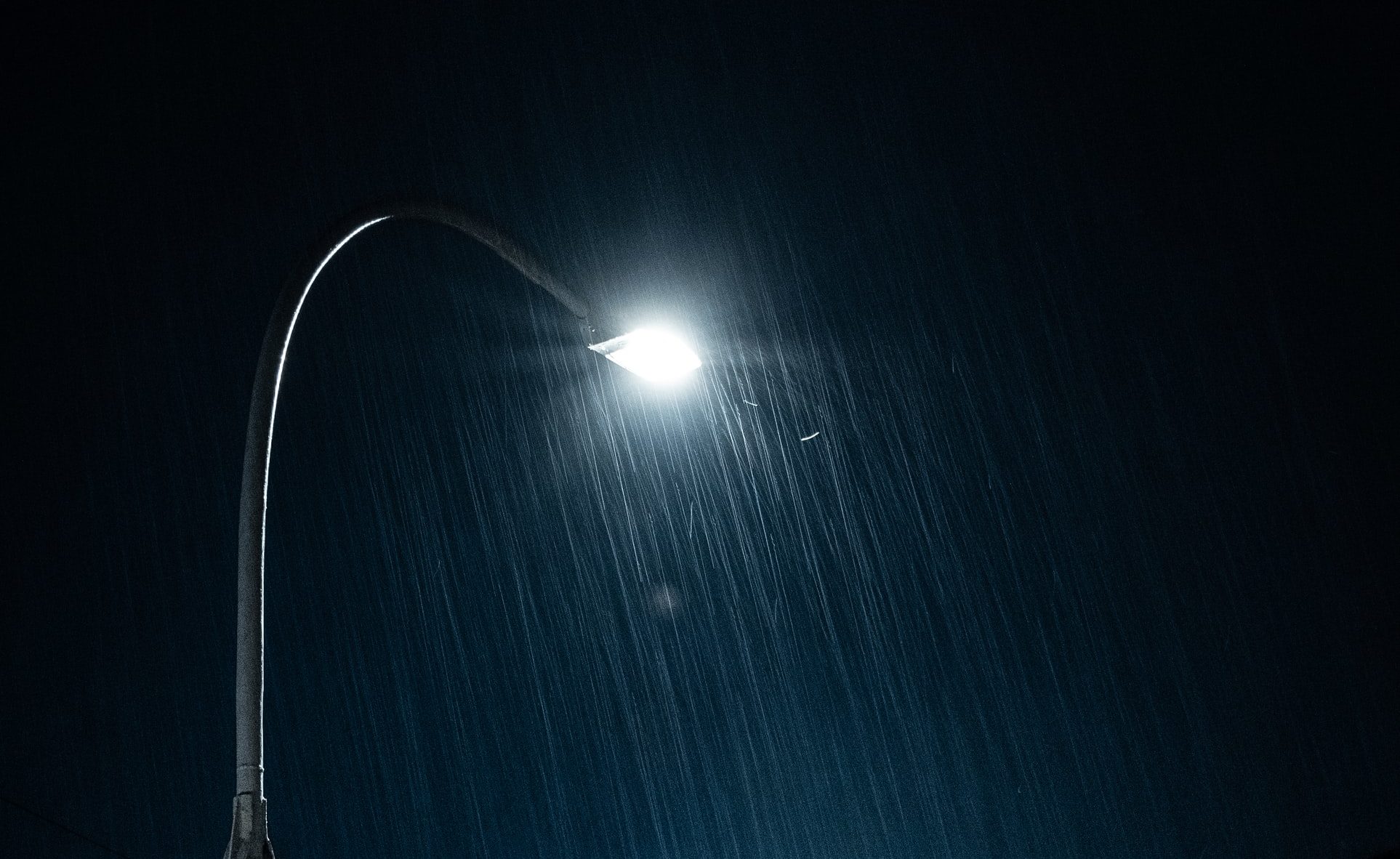 Edward’s right eye lid flickers a millimetre. A squib of light enters his brain. A tiny image too fragmentary to make meaning. A flicker of his left eyelid follows. A flash of light too brief to make meaning.

His hands grip the tassels on the edge of the woollen blanket that covers his body as he lies out on the put me up bed in the lounge. Too flimsy to grip. The tassels slide free.

Edward has a feeling of sinking. Something is pulling him downwards. Down to the ground. Down to the black earth. Down to the huge crack in the road outside of his house. His head feels dizzy. His throat chokes with lack of air.

He raises his head off the pillow and sees a whirring shape in the air. He lifts his arm reaching up to touch the shape. The shape transmogrifies into a bird. A huge white bird with giant wings.

‘It’s an albatross…just like the one in a poem I read for O Levels.’

There’s a whirring sound and the bird climbs higher as the sound increases.

Marion can’t get to school. Undercliff Road has collapsed. A huge section of the road has fallen 20 metres down fringed by upturned tree trunks and clods of earth stuck to their roots. Down further than a house. Down as far as a tall crane.

In other places the road looks as if the giant in her drama lesson has made very uneven crazy pavements of it. Weird shaped slabs have huge gaps between the platelets. In other parts there are bottomless holes with crumbling edges that if you could see into you’d have to step back for fear of falling into the abyss.

A few yards from their house the tarmac has been changed from solid road into a twisted bed of long black snakes each one with open jaws ready to attack any passer by. At the far landward edge is a narrow precarious strip that can still be walked along with great care. Even this feels it might slip away into the sea at any moment.

‘What if we’re next just like Harry?’ says Doris

Edward is hiding under a blanket. He can’t stop shivering.

Laura and Giles go out into the garden.

‘It’s a helicopter. Looks like a Chinook,’ shouts Giles.

‘Has it come for us?’ asks Edward still hugging his blanket.

The helicopter lands in next door’s garden. Lights flash. Red and blue illumination. Soldiers climb out. One of them shouts into a megaphone.

‘You must all leave your houses immediately. It’s too dangerous to stay here.’

Doris tries to keep calm. Edward is in a panic asking over and over again ‘What’s happening? Please tell me what’s going on.’

Marion keeps saying, ‘Everything is going to be OK Dad.’

A uniformed soldier is in the lounge having asked them if they need him to begin packing up their belongings. He has a large cardboard box by his feet and more empty boxes are stacked by the front door.

‘Your belongings will be put into storage. They’ll be quite safe.’

‘We need time to think it through,’ says Doris.

‘I hate to put more pressure on you,’ says the solider, ‘but there are other families needing our support.’

Four houses down Giles is fuming.

‘Look we came for a well deserved break and we’re staying put. Has it escaped your attention that tonight is Valentine’s Day and we intend to celebrate it?’

‘Not we Dad,’ says Jena. ’What makes you think you have a right to speak for all of us without even talking about it? You didn’t come into the woods with us…in fact you’ve not even stepped out of the door so you’ve no idea what it’s like out there.’

‘We’re cut off,’  says Doris. ‘The road has slipped in two places and we’re trapped in between them. My husband may need an emergency ambulance at any time and it won’t be able to reach us here. We have to move out.’

The soldier picks up his box and clasps it tight in both hands.

Four doors down Giles pops the cork of a bottle of fizz. Jena goes ballistic.

‘How can you start drinking when all this is happening round you ? I need to get away from you right now. I want to got back to London straight away. I’m going to phone for a taxi.’

‘There are no ferries running. All of them are cancelled.’

‘I can do what I f**king well like,’ says Jena striding towards the front door.

‘Where do you think you’re going?’

‘But it’s pouring with rain,’says Laura . ‘Stop her Giles.’

But Laura is having none of it. She throws a jacket over her head and goes after her daughter. An hour passes and at last the pair return soaking wet and shivering.

‘Where’ve you been ?’ says Giles speaking with a slur.

‘Jena doesn’t want to talk about it, but she does want to go back to London and I agree with her. We’ll pack up first thing in the morning. No arguments Giles.’

For once, Giles is silent.

Three figures huddled together in the dark. They’re holding hands. They stand by the gate of a small pebble dash bungalow in Ventnor.

‘But there are no lights on.’

‘Maybe they’re on round the back.’

‘They said they didn’t mind how late we came.’

‘How do you know her again?’

‘She’s a PE teacher at school.’

Marion opens the gate and goes to walk down the garden path.

‘Marion wait. I don’t think we should.’

‘Better not. Even in this light I can see there really isn’t room for us in there.’

‘I can at least go round the back.’

‘We’d be an imposition.’

‘It’s our last hope and it is just for tonight.’

‘There was that Air BnB. Maybe we should try that again.’

Edward begins to whimper horribly like a wounded animal.

At that moment the rain came on in torrents just like it had every day of the last week.

Off they scuttle. Marion and Doris support Edward and do their best to carry his weight. But they’re soaked before they have gone a few yards. They carefully lean Edward up against the car boot having exhausted themselves and Edward.

‘Soon have you in the dry love,’ says Doris whilst Marion opens the car door. Somehow the three of them clamber inside and Marion turns the ignition key. But there’s no sound of the engine firing into life. Marion turns the key again and again without success. She begins to swear profusely.

‘The engine must be damp,’ says Doris trying to keep calm and stop herself from crying.

‘I can see a bus shelter. The number 3 goes through the night to Newport.’

They struggle on through the rain for a second time. Doris and Marion either side of Edward as before keeping him moving, propping him up and leading him painfully on.

‘Soon be in the shelter.’

They make the shelter or half-shelter.

‘Come on Dad sit on the ledge.’

‘Sit on the ledge. It’s driest there.’

A few minutes later the welcome lights of the number 3 bus come into view  and three weary travellers struggle on board.  The bus hurries on in silence except for its engine sounds and an empty bottle of cider rolling about on the floor. Eventually Doris grabs the bottle and stuffs it deep into her handbag. This seems a signal for Marion to speak.

‘Lots of hotels in Newport,’ she says.

‘The Premier Inn is open all night.’

Edward says nothing. His head bowed and his eyes closed.

Sleep doesn’t come easy to any of them in their Premier room for the night. They toss and turn wondering what will happen to them in the future. With eyes closed, Doris sees their house buffeted by rain and wind. Edward worries about his piano getting damp and Marion promises to return to the house in the morning to check it over.

Marion sets off early, but her optimism in finding it is short lived. A huge padlocked metal gate across what’s left of the road blocks her way. She reaches up with both her hands and attempts to give it a good rattle but galvanised steel is not easily moved.

Tears run down her cheeks. She peers through the bars of the gate trying to catch a glimpse of their house. All she can see is the brick chimney stack.

‘Well at least that’s still standing,’ she says to herself.

She tries to remember the beauty of the Undercliff as it was. Hazel catkins harbingers of spring, the swathes of snowdrops, the smiling primroses, the special gleam of bluebells in the woods,  cowslips with their slender stems and peeping heads. The high canopy of green leaves providing shelter to all the living creatures.

Her dream ends with a jolt. Someone’s hand is on her back. She turns round to find it’s Lily.

‘When did this go up?’ asks Marion.

‘Early this morning. Four men came with a truck.’

‘Dad’s worried about his precious piano getting damp now there’s no heating in the house.’

‘Then tell him it’ll be fine.’

‘He does work himself into a state.’

‘We all have…and now they’ve put up this gate..it’s like trying to get into a prison.’

‘But this is St Lawrence.’

‘We’ve made the National Press. Even the BBC News.’

‘I don’t believe this is happening.’

Lily takes a tissue out of her pocket and begins to sob heavily. When she’d got her breath back Marion asks.

‘Tell me about it Lily.’

‘Here’s me banging on about our problems…sorry I’m being so selfish…how’s Ben?’

Marion puts her arm round Lily’s shoulder and waits patiently for her to speak. At last she does so.

Image: Norbert Toth under CC BY 2.0

newest oldest most voted
lifewriterbutmainlybeer
An uncontrollable feeling of being wound into the plot like a fish on a line, engaging synonymously with the characters; a strange déjà vu absorbing me like the young man in Helen Reddy’s Angie Baby, as I recall, some years ago, when an estate agent from the north of the island, showed me a beautiful character property south-east of Niton on Undercliff Drive. He knew no reason… Read more »
Vote Up30Vote Down