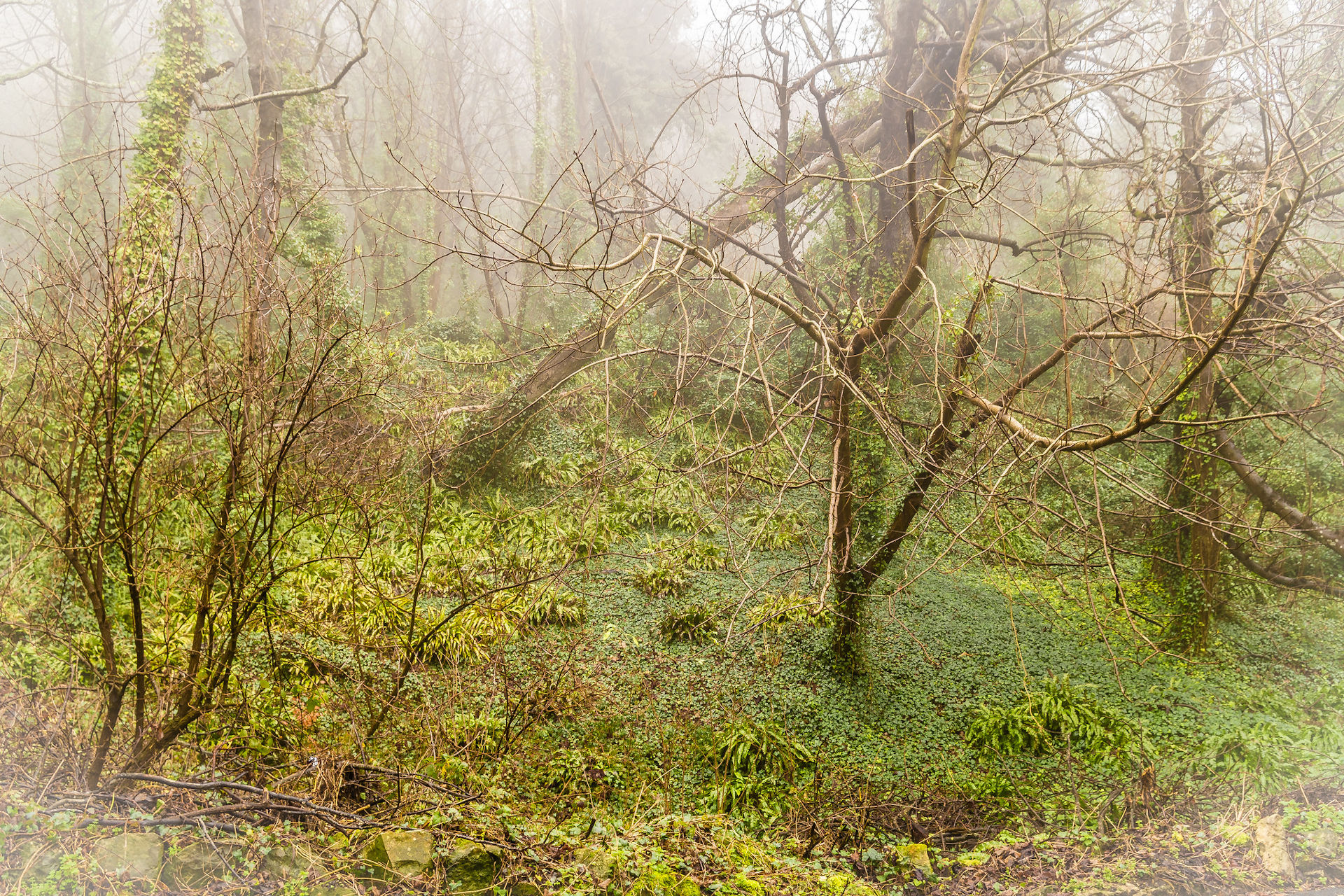 Marion steps off the hard tarmac of the road onto the soft mud of the path. She takes a deep breath and feels her whole body begin to relax. She’s on an ancient pathway. A holy route for pilgrims in search of healing. The path climbs a hundred feet up the upper cliff to the open downland. The way is part of the 800 year old network whose ultimate destination is Santiago de Compostela in Spain.

Marion is not walking all the way to Spain today, but she feels herself to be in need of healing. Her parents are religious, Marion is not. She just needs a space to herself with time to think.

The mud is deep. The path is littered with fallen rocks, so Marion treads cautiously.  She’s not walked this way for years. A busy life as a teacher has limited her free time, however today she’s determined to escape into the fresh air.

The fallen branch of an uprooted tree blocks her way. She bends down low to pass under it and nearly loses her footing on the slippery path. She quickly recovers to climb up. Up to a small terrace directly below the vertical wall of the rocky cliff. A broad timber bench holds out its arms to greet her. She sits down slowly and rays of rare sunlight shine on her face.

‘Paradise,’ she says out loud. ‘Enjoy it whilst you can.’

She closes her eyes and the distant unmistakable song of a blackbird filters into the silence. After a while she turns her head and looks at the soft white sandstone surface of the rock.

‘Robert loves Alice’ is carved there and dated 1908. If only her name was similarly inscribed.

‘Time to move,’  she tells herself.

Squidgy black mud gives way to worn stone steps and she’s up them in no time at all. The enclosed route gives way to open views as steps up onto open downland mark the end of the trail. Down below her is the open sea wrinkled blue with white horses whipped up by the strength of the wind.

‘There’s no anger in its nature just now,’ she says to herself feeling positive for once.

But even as she speaks a gust of even stronger cold wind springs up from nowhere stopping her dead in her tracks. She turns west towards the next village and forces herself on intending to walk back home by a more gentle route. She hasn’t taken many steps when she sees two cloaked figures coming towards her bent low by the ferocity of the wind.

She comes to a complete halt and stares at them. Yet still she can’t see their faces.

‘They must be ghosts from the past,’ she says to herself half in jest. ‘Two weary returning pilgrims all the way from Santiago de Compostela.’

‘One of them must be a child’, she says looking at the smaller of the two. ‘But why are their faces hidden? Are they too diseased to cure?’

She thinks of the black death that had wiped out half the population of Europe. Have they come to infect her?

One of them speaks. It sounds like the adult calling her name. Is this weird or is this weird? There it is again, quite clear and strangely not drowned out by the power of the wind.

‘How do you know my name?’ she asks, though her voice is half-silenced out by the fury of the wind. The tall figure stops abruptly and lifts their hand to their hood trying to pull it down. At last they succeed. Once the hood is clear it reveals a grinning face.

‘What’s the matter Marion? You look like you’ve seen a ghost. It’s only me and Ben.’

‘I have tried Giles.’

‘No signal at the moment.’

‘Stop arguing you two…you’re such a pain.’

‘It’s fine for you kids… you don’t have to drive.’

‘Me neither,’ said Simon.

‘Get the ticket out Laura.’

‘No need the ferry is in…and they’re boarding.’

‘Slow down Dad..you’ll kill someone.’

‘Wind your window down Giles.’

‘Wind your window down…she needs to speak to you.’

‘Sorry sir.. you’ve arrived too late for this one.’

‘You could fit a ten ton truck on there.’

‘Get out of the car.. Laura… take a photo with your mobile…look at all those spaces…this is insane…I need to speak to your manager.’

‘Stop right there Giles. You’re being ridiculous. The ferry has left and nothing will bring it back. We’ll just have to wait for the next one and you’ll have to be patient. We’re heading to the Isle of Wight for a relaxing break, not a tense nightmare with you winding us all up to screaming point.’

‘Before you have a heart attack.’

‘I’ve been planning some special treats for us. A candle-lit Valentine’s Night meal where our dear children can tell us about their latest girlfriend and boyfriend.

‘We can have some amazing walks in the woods and on the beach and most special of all have jacuzzi spa time in one of our brilliant hot tubs on the lovely Isle of Wight.’

‘That’s if it stops raining’

Marion is struggling up two flights of stairs carrying a heavy step ladder.

‘Let me help you,’ shouts Doris from the kitchen down below.

Silence. Marion wants to get the job done without bothering her Mother. She eases open the legs of the ladder so they’re balanced and looks up at the loft hatch above her head.

‘Not been through that for years,’ she says to herself.

But her Mother is quicker to join her than she imagined.

‘I don’t mind doing it alone.’

‘Brought the big torch…you’ll be needing that.’

Marion climbs the step ladder and once she’s at the top reaches up with both hands to lift the loft hatch board.

‘I always knew this was a tricky job.’

‘Let me come up as well and we can both do it.’

‘Don’t think the ladder is strong enough to hold both of us,’ says Marion struggling to keep her balance.

The hatch board is freed abruptly and the weight of it nearly topples Marion off the ladder.

Marion slithers into the loft holding the torch. Silence.

‘See anything? says Doris in a quiet voice.

‘Just a small one on the outside wall’

‘Yes, but I think its an ancient one.’

‘I remember it last time I was up here…just the building settling… it’s what old houses do.’

‘It’s nothing to worry about Mum…really it isn’t.’

‘We best go outside next…check out there.’

‘What in this rain?’

‘Better to be safe than sorry.’

‘Where’ve you been with that ?’

‘Not yet…what’s going on in the loft?’

‘I may have been ill, but it’s not taken away all my faculties.’

Marion looks into her Dad’s eyes and doesn’t know what to say next.

‘Is there a crack up there?’

‘You and your Mum have been hiding the truth from me, but I need to know.’

‘We didn’t want to worry you.’

‘So you burden yourselves with it…what’s that saying a trouble shared is a trouble halved…so share it please.’

‘But he loves coming down here. We’ll soon be at the beach Vulcan.’

‘You are a sexist pig…a typical male comment. You should know better…Mum’s gone on at you often enough.’

‘But it all looks so different. The path seems narrower and all the trees seem bigger. I don’t remember a stream running in the middle of the path either.’

‘Probably another dog close by.’

They take a few more steps into the wood and as they do so, Vulcan becomes even more upset and stops dead in his tracks.

‘Just going to take a look ahead. See if I can spot anything.’

Jena disappears out of sight round a bend in the footpath whilst Simon checks Vulcan’s feet to see if he’d got a thorn stuck in his paws.

But still the dog is whining pitifully.

‘Where has that girl gone?’

‘I don’t believe what I’ve just seen,’ she says.

‘What have you seen?’

‘Devastation. You wouldn’t believe it.’

‘Trees flattened… uprooted… a huge one fallen over the path…big cracks in the earth…you’ve never seen anything like it.’

‘Dad was going on about it yesterday, but I didn’t know it was a hundred metres from our cottage.’