Another great day of trials for the Vectis Isle Pioneers Motorcycle Club. 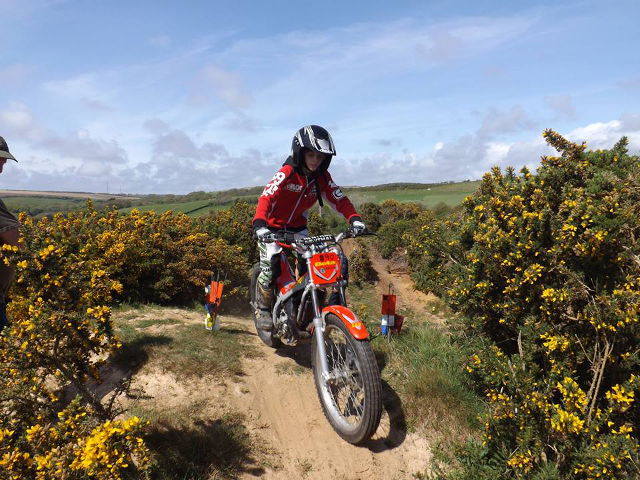 Thanks to Wayne Brodie for this report from the Vectis Isle Pioneers Motorcycle Club. Ed

The Vectis Isle Pioneers Motorcycle Club held the Second Round of the 2015 Trials Championship at Haslett Farm, Shorwell, courtesy of Mr Glen Draper.

The Adult Beginner class was convincingly taken by Keith Jacobs – Keith returning to trials riding after a good few years. Although he was slightly hampered tackling sections on a pit bike. Brave man! Newcomers Antony Avey and Andy Gray-Ling finished in second and third respectively.

Harrison Crickmore had to settle for second spot. Harrison was no doubt concentrating on getting to grips with his new bike. I had a chat with Will who said he and his Dad really enjoyed the trial – although slightly more difficult than they had expected. Brilliant effort – I remember thinking the same at my first attempt! Twin Shock riders
Two Twin Shock riders battled it out today with Nick Symes finishing ahead of Stewart Freeman. Nick was the only Adult rider to clean section four which undoubtedly helped him to first place. The Novice class, was won by Wayne Brodie, who take it from me, was most surprised with this result!

Thanks and welcome
The Club would like to say a special thank you to Glen for allowing us back, once again. The course was set by Howard Jacobs, who presented us with eight excellent tight and twisty sections.

The Club extends a warm welcome to six new members – father and son duo, Andy and Will Gray-Ling, Antony Avey, Keith Jacobs, Geoff Taylor and Jon Croft. This being Andy, Will and Antony’s first ever trial – we hope you all enjoyed the experience and look forward to seeing you at future events.

Fixtures
The next trial (our annual three stage trial) held in memory of our late former President, Dave Lee, will take place on Sunday 28th June.

This is still to be confirmed – please check the Club’s Website www.vipmcc.org.uk or full details, which will be update as soon as possible.