Ventnor Botanic Garden: IW Council Highlights Their Failings In Their Own Report (UPDATED)

Why was no action taken in the past ten years on unreliable lift?

Summary: IWC’s own figures are that a malfunctioning lift at the Ventnor Botanic Garden is costing them (and us as tax payers) a lost income of £7,000+ a week in the Summer. The council has allowed this to go on unfixed for ten years. Why haven’t they acted before now?

It was with some surprise that we read on Monday about a delegated decision due to be made at the Isle of Wight council (IWC) by Cllr George Brown about the IWC possibly spending £220,000 on a replacement lift at the Ventnor Botanic Garden (VBG). 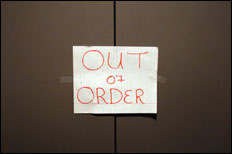 The surprise came when digging through the details in the council’s paperwork – in it the IWC admit that they have been aware of the problems with the lift since its installation ten years ago and are blaming the commercial failure of the Botanic Garden largely on the lift.

It begs the question – If the council has known about this problem for ten years – why haven’t they acted on it before?

Item 7 “The fact that the facilities have not achieved their full commercial potential is largely due to the unreliable inclined lift, which was installed to the “architects’ specification at the time of construction.” This lift was unfortunately installed out-of-square a decade ago, and has therefore never functioned properly and has a reputation locally for unreliability.”

Was the IWC negligent?
The IWC say that the lack of commercial success of the Garden is due to the unreliability of the lift.

Given that the IWC have known about the problem with the lift for ten years, and that it has an impact on visitor numbers, haven’t the IWC been negligent in protecting the commercial success of the Garden?

Why wasn’t the lift replaced?
The IWC claim that the lift was installed ‘out-of-square’ to the architects’ specification at the time of construction. They’ve known about the problems for ten years.

If the council knew about the problems, why wasn’t the lift previously replaced/repaired?

New lift so VBG can be sold?
The answer may be that prior to spending review, the council has not been seeking partnership with an outside organisation for VBG.

(VB broke the ‘Will VBG be sold off?‘ story back in mid-August)

The report goes on to state,

Item 15 “To enable the council to be able to move towards these, or other, forms of partnership working and alternative delivery methods, the fabric of the Visitor Centre must have been maintained to an appropriate level. “Appropriate” in this context not only means that the site may be considered a viable asset, but also a level which demonstrates the council’s commitment to investing in a key asset in its ownership.

So if the problem was known about but nothing done for ten years, doesn’t that mean the IWC haven’t been demonstrating their “commitment to investing in a key asset in its ownership” for a decade?

Income loss of £7k per week
The report claims that the problems with the lift have had an adverse impact on the financial success of the Garden.

It states, “the facilities have not achieved their full commercial potential is largely due to the unreliable inclined lift.”

It goes on to say that coach drivers are discouraged from bringing parties of visitors to the Garden because it is widely known that the lift is out of order, adding that for “each coach which turns around without [visitors] disembarking loses the Garden over £200 in potential expenditure, which equates to approximately £7,000 of lost income per week in Summer, plus additional secondary retail spend on the site.”

Not on the Forward Plan
As this is such a large amount of expenditure, it’s surprising that the item was not on the council’s Forward Plan, as would be normal in these circumstances.

When we questioned the council about it, they told us it was because “an urgent decision that needed to be made.” This is made all of the more confusing as the IWC report says that it had been known about the problem for a decade.

The Report says that the Chairman of the Overview and Scrutiny Committee had been consulted and was “content that this matter proceeds to a decision.” Adding that “he hopes that the approval of investment, if it occurs, can be taken as being indicative of a commitment by the Isle of Wight Council to continued involvement in the running of the Botanic Garden as a valuable community asset remaining in public ownership.”

Questions raised
Many questions are raised by this

UPDATE: We’ve put the above questions to Cllr George Brown and separately to IWC Chief Exec, Steve Beynon. We await their replies.

Image: TheoGeo under CC BY 2.0

21 Comments on "Ventnor Botanic Garden: IW Council Highlights Their Failings In Their Own Report (UPDATED)"

Same with Northwood House..not fit for purpose because a ceiling fell down…Ceiling fell down because the council failed in its obligation to maintain the property..same true for Ryde Theatre & Shanklin Theatre, both threatened with closure over maintance estimates based on no maintance being done for 10 years (at least)

Vote Up00Vote Down
romantic
Rather than dealing with this when they had ample resources available to them the Council instead concentrated their efforts on flogging the family silver and squandering the money from our assets. Now in times of austerity this suddenly becomes an urgent priority. But why is this a delegated decision? Although Cllr Brown already makes the decisions at CH what has happened to the thinly veiled pretence of… Read more »
Vote Up00Vote Down
meursault
I guess The Royal has the ability to reduce the rates on their lease agreement if the landlord is not providing adequate infrastructure/access. So the lift not working could actually cost the Council lost revenue from existing tenants and undermines their ability to attract new tenants to the site as a part of their review. That still leaves the question of why it has not been addressed… Read more »
Vote Up00Vote Down
mojo

This lift was “breaking down” within days of it being open to the public. I can never understand why the contracters who supplied and fitted this life never seemed to be held to account for its unreliability.

Simple enough. It’s down to a lack of leadership and experience in the council.

A scandal. Surely council heads should roll over this.

Theres always someone else to blame

Vote Up00Vote Down
Don Smith
Lift! A good ramp and a stout pair of shoulders is all that is needed. Employ a chap to give wheel chair users a push;, anyway most disabled have motor assisted wheel chairs these days. They employ three security guards to ensure that the students behave at Medina High School; could a couple of these not be employed at VBG and double up as information guides. A… Read more »
Vote Up00Vote Down
Angela

Incompetence yet again and good old George Brown leading the charge. Northwood House today, Ventnor Botanical Gardens tomorrow. As a Conservative voter I’m appalled at the lack of accountability, transparency and accountability.
Sooner they all go the better.

if you dont vote conservative again then they may be gone all the sooner.

Leadership and accountability. When did you last experience either with IWC?

Funny old thing but I think Angela has hit on something! All these mistakes seem to lead back to Cllr George Brown, perhaps its all too much for him. I believe he’s quite old, perhaps its time he retired – The sooner the better considering his track record to date!

Sorry – that should have read lack of accountability, transparency and consultation.

Vote Up00Vote Down
Good Fairy
This worries me a tad, i quote from the article above.” .. coach drivers are discouraged from bringing parties of visitors to the Garden because it is widely known that the lift is out of order” Isn’t the lift only used to get to or from the upper Floor of the visitor center ?…something that you can easily do by going a short distance around to the… Read more »
Vote Up00Vote Down
Greenboy
The council’s explanation is wrong. Many years ago I moaned to the IOWC about the lift. It is a very simple lift with virtually no complications at all. They let the contract to an Italian company and did not pursue the legal case when they failed to install properly. I contacted the Italian lift manufacturer who told me that they had no liability to maintain it. I… Read more »
Vote Up00Vote Down
intentionally blank

does anyone else think that the council may want to get the lift working so that when they put the gardens on the market everything is working? That they dont want to have to accept offers under their asking price because a lift isnt working?

“New lift so VBG can be sold?”

so it does, missed that bit.

Vote Up00Vote Down
Oldie
The visitors centre has been a white elephant and a great disappointment from the start. The rooms apart from the cafe and toilets serve no useful purpose. One used to walk from the carpark down the gently sloping paths through the magical palm-garden through the little doorway which opened to the most beautiful sunny rose garden with pond and fountain – a lovely pub and a wonderful… Read more »
Vote Up00Vote Down