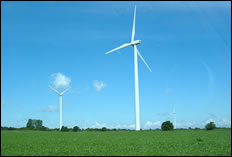 Before making his way to the election count on Friday afternoon,
Andrew Turner met with representatives from the Isle of Wight County Association of Trade Union Councils to discuss the impending closure of Newport based wind turbine manufacturers, Vestas and the loss of over 500 jobs.

Despite already having had discussions himself with the Minister for Energy & Climate Change, Mike O’Brien, and Jonathan Shaw, the Minister for the South East, Mr Turner is now taking the matter higher and will be writing to Lord Mandelson, insisting that he travel to Denmark to meet Vestas Chief Executive Officer, Ditley Engel.

We also understand that Mr Turner will be questioning the South East England Development Agency (SEEDA) to see what steps it is taking to prevent the closure of the cutting-edge factory in Newport.

The TC Association, who Mr Turner met with, represents 8,000 workers across the Island said that MP Andrew Turner has been the first person to listen to their fears about the future of manufacturing on the Island.

We’ll bring you more news as we get it.

Why was Mr Turner going to the count? Only candidates, their spouses and election agents are allowed so were the rules bent to allow him entry?

I saw him in the cafe area where everyone was convened – candidates and press – not sure he even went into the hall where the count was taking place.

The Electoral Commission Guidance for Candidates and Agents, 6 . 17
“The Returning Officer (Steve Beynon) may also permit other people to attend the count at their discretion, but is not obliged to do so. The decision of the returning officer as to who may attend the count is final.”