Some surprise as the Vestas possession order court case is adjourned. 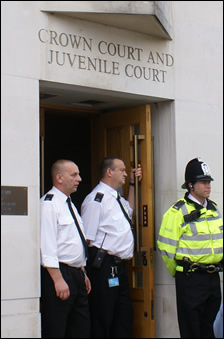 Surprise at the Crown Court this morning as the hearing of the Vestas Blades UK Ltd Vs Arbuthnott case was adjourned until the 4th August.

Problems with servicing of the possession order
They were not personally served, the only person served was Mark Smith.

The hearing was premature
The deemed date of service was not the actual service date, because it was served after 4pm.

The earliest the hearing should have been is tomorrow (Wednesday)

The claimant said the possession orders were served on Mark Smith and copies left at the premises. Their argument was that it only had to be served on one person and that this was good enough because it was not a residential property.

His Honour, Judge White’s response was that there were 13 people named on the order and all 13 people needed to be served personally.

There then followed a detailed discussion between the claimant and the judge, whereby the claimant argued that all names could be removed from the order and they still be served. The Judge’s response “Isn’t that a way of getting around the rules?”

“Once you know who they are you have to serve them and your arguments don’t sound very attractive to me.”

On the point of timing, the claimant said the Judge would have been able to shorten the time and was invited “to exercise his power.”

The claimant said that there was “real risk of disturbance” if the workers were allowed to stay on the Vestas site and the Judge asked are there “any threats?” and the claimant replied that he understood that there was a substantial police presence.

The Judge then said if that’s the case then they’re “likely to be able to contain” any trouble. He then posed the question “no kettling then?”

Defence then said the reasons put forward by the claimant were not sufficiently compelling. “It’s up to the claimant to make sure that it’s within the rules.”

He continued that there had been no disturbance in the nine days of occupation. They (the claimant) have taken the option to serve on individuals.

The Judge replied “I agree, as far as service is concerned the rules are clear. Where it is not residential, two clear days are needed.”

He saw “no compelling reason” to shorten the number of days.

He continued that there was “no evidence of any threat.”

“Not to say I sanction the occupation.”

“Any named individual must be personally served. I am not satisfied that they (the possession orders) have been performed correctly.”

“This cannot be rectified by deleting names from the order – that is simply to get around the rules.”

He finished by saying “It’s most appropriate to adjourn.”

The claimant argued that there was the option for the claimant to discontinue and wanted to change the order to become ‘persons unknown’. The Judge said that he was “distinctly uncomfortable” with it and again repeated that it appeared to be a way of getting around the rules.

The claimant said that the names had been “tentatively identified”. The Judge exclaimed that they’re “not tentative” the claimant knows who they are because they had been named on the order.

The Judge continued “The claimants have to make up their minds”, “I do expect them to get their facts straight.”

The claimant then wanted to go under ‘application under alternative means’ saying it would be a most futile exercise to serve the papers to their (the workers) home as they were not there.

The defence stated “The claimant hasn’t got its house in order.”

The Judge replied “Proper notice must be given supported by evidence.” and continued to confirm that the notice period needed was three clear days. If the order was issued and served today, that would be Tuesday 4th August at 10am.

I am more than impressed at the swiftness and informative nature of your reports. Nice one!

I agree, nothing on the County Press Website yet!!

The CP will be too busy preparing their Ads.

Brilliant report and I love that Judge!

But lets get down to the details – the court issued a summons for 13 named persons – are they all on the sit-in? What about the other 12 (or more) who are not named? Did the same 13 named get the sack last night?

What about interviewing an island lawyer for an impartial overview of what has happened?

Keep up the good work.

I would like to say that Ventnor Blogs coverage has been second to none. The most detailed and accurate report of any news service. I would like to thank ever one at Ventnor blog and hope you keep up the great work.

Vote Up00Vote Down
Brian Lucas
Yes, I know that VB is being followed nationally on this issue. Thank you S&P. I am sorry for the workers, but we should all thank them for making the whole country think realistically about green wind energy. We need the government to put its actions and cash where its wooly warm green words are. We need all the nimby folk to relaise what is at stake… Read more »
Vote Up00Vote Down
Anna

The government have always stated, as has the MP, that they have offered Vestas subsidies to stay on the Island but the firm doesn’t want their money.

Vote Up00Vote Down
Mr Mister
A business like Vestas needs orders to survive – not subsidies. Vestas would need millions to convert St Cross to make the commercial type of blade required for the UK, so a handout at this point is pointless. Why is Andrew Turner even being referred to? He has never had any interest in Vestas, despite them being one of the bigger employers on the island. He knows… Read more »
Vote Up00Vote Down
Carl

Totally agree – Ventnorblog is my 1st port of call for up to date news. Well done.

The judge sounds brilliant. How are they going to personally serve the papers?

Sal,
All those hours spent recording boring council meetings!
You guys more than deserve a genuine, juicy news story and you have really done this one justice.
Brilliant report!
I, too, would like to offer my compliments to the excellent Judge White.

Thanks for the report. It does sound like the orders were cobbled together! I like today’s Guardian front page “Pizzas and P45s” headline about the orders having been served by food parcel.

Vote Up00Vote Down
Sailor Sam
The summons’s have to be served on each person personally by a representative of the plaintiff or the plaintiff has to convince the court that personal service is impossible. In the latter, the court may rely on service by media which means the plaintiff can serve the notice in the press and I think it would require publication in at least 4 papers. All this means of… Read more »
Vote Up00Vote Down
Wendy V

Another piece worth reading in The Guardian by Severin Carrell, headlined “Latest protest leaves climate strategy twisting in the wind: From Shetland to the Isle of Wight, feelings run high as plans to transform the UK into a low-carbon economy hit further trouble” – link here:
http://www.guardian.co.uk/environment/2009/jul/28/shetland-windfarm-protest-rspb
It’s attracted a lot of interesting reader comments after the article.