Big development on the Vestas redundancies, as the workers take over the building.

We’ve just been informed that 20-30 Vestas staff have taken over the offices in the Newport Factory this evening and are staging a peaceful protest at the forthcoming job losses. 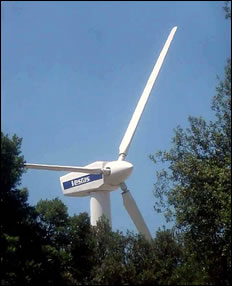 We spoke exclusively to a member of Vestas staff who informed us that the staff “feel that they have been treated like rubbish.”

He told VentnorBlog that the redundancy pay deal has been held up to the last minute and the concerned staff were very worried about their livelihoods.

About an hour ago, staff took over the offices at the St Cross site in Newport. Police are said to be outside the premises.

Our source told us that the staff “just wanted to be treated like human beings.”

We’ll bring you more news as we get it.

Well done lads! Your not standing alone, the support will be there soon! Be strong and thankyou all.

No photos from me tonight… Swine Flu seems to have taken its toll.

Good to see that they are standing up for themselves!

Power to the People.

Go lads – fight for your jobs and don’t let them walk all over you.

Fantastic! Way to go, best of luck. Keep it up and don’t give in. The bosses need us, we don’t need the bosses!!!!
love and rage

Time to stand up and be counted.
Take back what has been taken off all of us, if the plant and the jobs can be saved the island will surely feel benifit.

Good on all the people involved in this. You have my support and I hope that you have the support from everyone on the Island.

What are the government thinking of? They should save this factory, labour party “green”? Prove it! save these guys jobs now,its even making a profit!!!!

Great coverage VB.
All best to those involved.