Visitor’s Views of The Isle of Wight: Part One

As we all know, many people visit the Isle of Wight for holidays. Here’s the experience of one of them who recently revisited after a break of 13 years. It sounds like he’ll be back soon!
If you feel the urge to write something similar, …

As we all know, many people visit the Isle of Wight for holidays. Here’s the experience of one of them who recently revisited after a break of 13 years. It sounds like he’ll be back soon!

If you feel the urge to write something similar, please get in touch with us. Ed 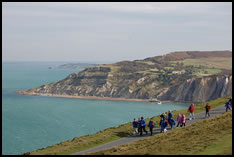 I think we all have a defining holiday that we recall from our youth…one that we talk about to friends and family whilst wearing rose coloured spectacles.

It’s 1985. Sometime in the summer…probably July, if my memory recalls.

I’ve spent god knows how many hours on the back seat of a Ford Granada travelling from Lytham to Lymington to catch the ferry to the Isle Of Wight.

It’s summer holiday time…and for us Carruthers it’s back to Ventnor and back to the St. Maur Hotel for the third time.

As my brother and sister are now 19 and 16, they’ve stayed at home and my cousin Paul has come along with us. 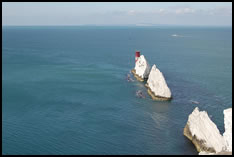 As he’s not been before he doesn’t know of the excitement of Blackgang Chine. The ‘death slide’ at Robin Hill. The coloured sand filled glass gubbins and multi-hued cliffs at Alum Bay or the battery at The Needles. The beach at Ventnor. A shell shop in Shanklin. The arcades at Ryde. Staying up late in the St. Maur bar and playing the rings game on the back of the door. The chance of meeting a pretty girl or two on Ventnor beach.

He knew none of it but fast forward almost 24 years and I realise that I’ve not forgotten about most.

So, as I boarded the 9:15 ferry to Yarmouth yesterday I eagerly twittered “on the Isle of Wight ferry. Haven’t been for 25 years. Am I excited? You bet!!” and watched out for a peek of the Needles as we crossed. 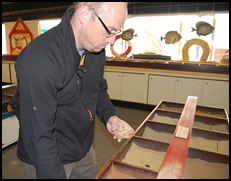 I hadn’t been this close to the island since 1985, at least with the chance to visit, and Mrs C. (Jackie) has never been so we couldn’t miss the opportunity to take a look.

As soon as we drove off in Yarmouth we headed straight to Alum Bay, parked up and walked down to the Battery, I had a somewhat irritating conversation with a chap there who told me that I wouldn’t have anything like enough time to see ALL the Island in just 10 hours…I’d have more time if he buttoned it!

Anyway, we snapped a few pics of The Needles and tromped back to Alum Bay…but we didn’t leave without filling a glass frog with sand. Somehow the sand didn’t seem as vibrantly coloured as it was when I was young. 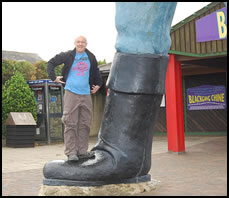 Back in the car…Blackgang Chine was up next.

To be honest I was surprised that it still seemed to be thriving as it seemed to be vanishing into the sea at an alarming rate in the 80’s.

But, sure enough the giant miner/pirate/smuggler (just what is he supposed to be?) is there to greet me as we pull into the car park.

Brilliant…memories of climbing on dinosaurs and such nonsense flood back.

Next on to Ventnor. Read part two tomorrow.

2 Comments on "Visitor’s Views of The Isle of Wight: Part One"

If he came from Blackpools back door, the IOW must have had some pull on him, well done Mr.C. you obviously know “sheer class” when you see it.

I had a similar experience a few years back when I revisted the Northumberland coast after many years away. Remembering things I thought I’d forgot.

Anyway, reading this has made me want to go to the Isle of Wight. Looks really nice. And will get me away from the crush of Manchester. :)